This week the comic book I am most excited to read is...
TEENAGE MUTANT NINJA TURTLES/GHOSTBUSTERS II #1 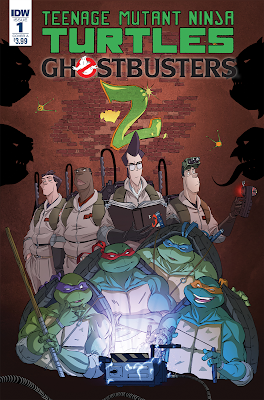 The two beloved franchises reunite for a new adventure more action-packed and hilarious than ever! The Turtles are stuck in a ghost dimension by an old adversary and only the Ghostbusters can save them. The ensuing adventure will be an inter-dimensional romp like never seen before! The sequel to the surprise crossover hit! From the creative teams of both TMNT and Ghostbusters!
(W) Erik Burnham, Tom Waltz (A/CA) Dan Schoening
SRP: $3.99
Synopsis provided by PreviewsWorld.com
Posted by Spyda-Man at 5:34 AM