Return to the Antique Store: Part I 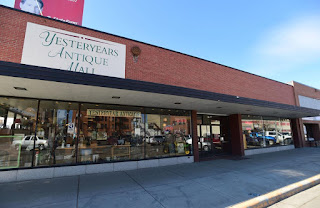 It has been a while since myself, my wife and kids have been out and about at our local downtown shops, but a few weeks ago we decided to go to one of the antique stores. We found some incredible items there. Of course the majority of it was way over priced, but I did manage to score some solid deals on a few items. After our trip through time the kids were feeling exhausted, so we took them to grab some ice cream. It was a beautiful day outside, but I would like to share with you some of the "antiques" that we saw inside the antique store. I didn't pick any of these up, but I thought they were worthy of a post. 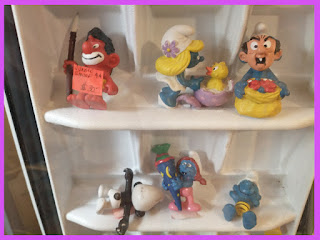 Assorted Smurf Figures
As far back as I can remember, I have loved the Smurfs. My Mom said I used to sit in my height chair and dunk my Smurf figures into my milk and then suck the milk off of them. Pretty gross, but hey I was like 2 years old! Anytime I see these figures at a store or garage sale, I take the time to check them out. These were a bit over my comfort price at $30 for the "Jungle", "Trick or Treat" and "Zombie" Smurf. The others were around $10 each. I did pick a few up for cheaper, but I'll show those in a future post. 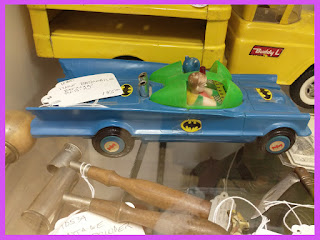 Old Metal Batmobile
I don't know much about this toy. It was behind glass, so I couldn't find a manufacturer or production date on it. I tried searching Google and found a few from the 60's that look similar, but not exactly the same. Those were going for around $400, so I assume the $185 price tag on this awesome looking Batmobile is a fair price? 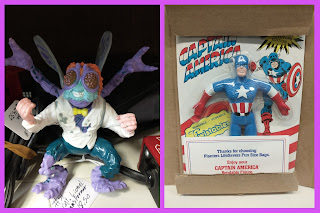 Baxter Stockman & Bendy Captain America
The Baxter Stockman figure was around $10 and was in pretty good condition. I thought about picking him up, but I already have one in my collection, so I left him for another collector to add to their TMNT collection. I thought these Lifesavers promotional Bendy Captain America's were pretty neat, but at $10 I didn't pull the trigger. These look like they were from the early 90's but I can't seem to find any info on them or the promotional giveaway campaign. There were a ton of them at one booth, so maybe next time I stop by Cap will be coming home with me! 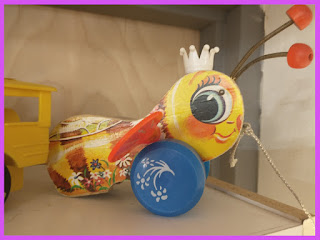 Fisher Price Queen Buzzy Bee Toy
My family had one of these pull toys when I was a kid! I'm sure it was a hand me down from one of my older sisters, but I thought it was pretty cool and would pull it around the house while watching the wings spin and antennae bobble around. The one in the picture above was from the 60's and I found that Fisher Price still makes a version of this toy for it's "Classics" toy line! 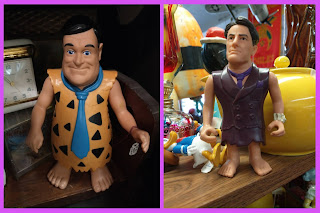 Flintstones Movie Action Figures
These Mattel produced figures were released alongside the theatrical release of the Flintstones movie in 1994. I remember seeing this movie in the theater and being sort of disappointed. I never had any of these figures as I was starting to reach my teen years at this time, but seeing these takes me back to some of the hype surrounding the film. I thought John Goodman did a solid job as Fred, but that wasn't enough to make me want to take him home with me. A few booths later I found a figure of Cliff Vandercave as played by Kyle MacLachlan! The resemblance was uncanny! 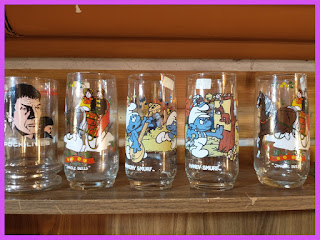 Character Glasses
I'm pretty sure 50% of the booths at this antique store had old character glasses from the 70's & 80's. I already have quite a few Peanuts, Smurfs and Garfield glasses in my collection so I passed on this group. They were about $10 each on average at the antique store. The glasses I am currently seeking out have our favorite pellet muncher on them...Pac-Man!

Pulsar Action Figure
Pulsar was released in 1976 by Mattel to try and capitalize on the success of Kenner's Six Million Dollar Man toy line. This figure had a pumping organs feature that was able to be seen through Pulsar's clear plastic torso. The line was not very popular and only produced 2 figures, Pulsar & Hypnos (The Bad Guy), and one lone playset called "The Life Systems Center". The seller was asking $50 for this figure which is fair based on going rates on the internet. I vaguely remember hearing of this toy, I never had him, have no memories of him, so he stayed on the shelf. 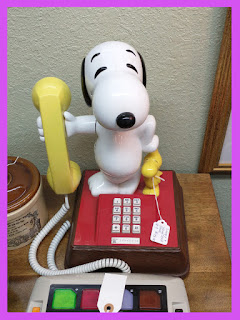 Snoopy Phone!
This awesome phone was released by Telecom in the 70's and the one at the store looked fantastic! This was one item that I was really second guessing, but my wife gave me that "really" look when I told her how much it was. At $75 that seems to be fair as I've seen these go for anywhere between $50 - $150 online. There is a rotary version of this phone that seems to be more sought after which makes those prices fairly high. I can't say that I'm not a little sad that I left Snoopy behind, but I guess we don't even have a landline at home that I could have hooked this bad boy up to anyway. 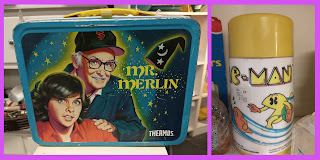 Vintage Lunch Boxes & Thermos
I saw this cool Pac-Man Thermos for $12 and there were also some sweet looking metal lunch boxes at a few of the booths. I saw a Muppets, Dukes of Hazzard and Mr. Merlin lunch boxes. These were priced between $30-$40 without the Thermos. Does anyone remember Mr. Merlin? I don't, but a quick search on Wikipedia tells me this show ran for one season in 1981-1982 and was about a boy named Zac who pulls a crowbar from a bucket of cement. Of course this crowbar was actually King Arthur's sword Excalibur and now Merlin disguised as a mechanic in San Francisco must train Zac in the magical arts. Sounds pretty crazy right! Well, you can view some of this insanity below by watching an episode of this lost piece of television history!
Posted by Spyda-Man at 3:30 AM