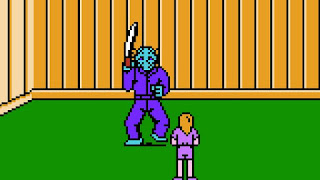 Some genius at NECA had the brilliant idea to make 8-bit versions of horror icons Freddy Krueger and Jason Voorhees back in 2013. Like most toys I drool over, the Jason version was a SDCC exclusive. I gave in to the thought that I would never own this guy. Then there was a ray of hope, they re-issued Jason recently and I found him in the wild! 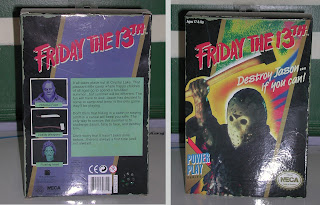 Of course there are some slight changes to the packaging from the SDCC version, but the one outstanding change that was made was...the inclusion of a sound chip in the box that plays the Friday The 13th video game theme! HOLY CRAP! You can hear it below in all it's 8-Bit glory!
Also the box mimics the look of the vintage NES box beautifully, Here is what the NES box looks like. Compare it to the above images of the toy box. Awesome, huh? 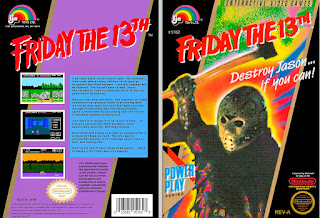 The toy itself is just a re-paint of a previously released NECA Jason figure, but my gosh is it glorious. The sculpting is nice.The colors are so annoying and nowhere near movie accurate, but that's how the game was. My only complaint is that I would have liked to see his trademark machete included as an accessory. Who can forget receiving a beat down from Jason in his purple jumpsuit and baby blue mask? Why did LJN choose these colors? I don't know, but I love it! 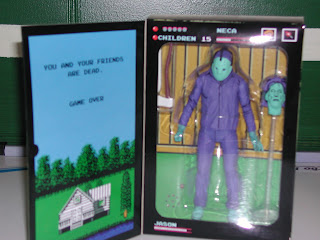 Below is a closer look at this ugly fella. I am so glad I was able to grab this 80s icon for around $20! He now owns a prominent space on my wall of fame. 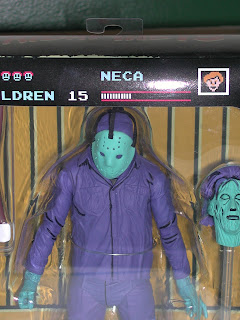 For any of us who played the Friday The 13th game back in the 80s, we all know what a pain in the ass it is and how much frustration went into finding Jason's mom's head and the lighter and saving your friends! UGH! Enjoy a walk through of the game and relive those memories today.
Posted by Spyda-Man at 4:58 AM