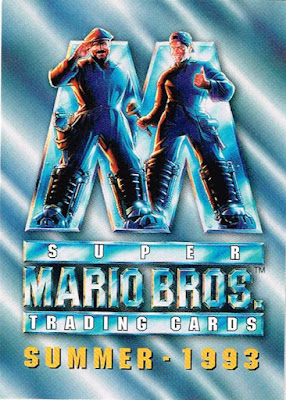 In the summer of 1993 kids all over the United States waited with anticipation for the theatrical release of the blockbuster film event of the decade! That film was Super Mario Bros. starring Bob Hoskins as Mario and John Leguizamo as Luigi! I saw the movie at the theater when it was released and enjoyed it for the most part, but I was left with so many questions. Why was Koopa a human? Why were the heads of the Goombas so small? Where was Princess Toadstool? After all these years I have no answers for these questions, but I have grown to appreciate the Super Mario Bros. movie for what it is...a fun, crazy, industrial thrill ride filled with fungus and mediocre performances! In other words it is an amazing sight to behold! 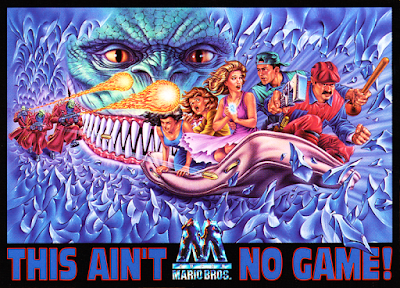 Around the time the film was released naturally there was a ton of tie in merchandise. Everything from action figures to books to music soundtracks featuring Roxette were released to the unsuspecting masses, but the one thing that always eluded me was the Super Mario Bros. movie cards by Skybox! Years ago I bought a sealed box of 36 packs on eBay for around $10. I never had any intention to open them, but plans change. 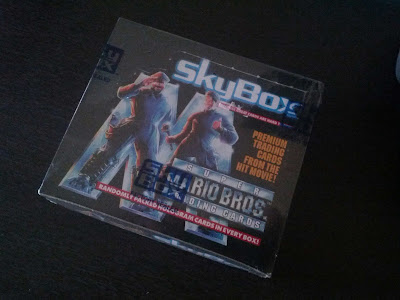 Recently me and my kids watched the movie and my son fell in love with it. I mentioned to him that I had a box of the cards and his little mind was blown. We dug the cards out of our back closet and sat on the living room floor with the girls opening every pack to see if we could complete a whole set and we did! We got the 100 card base set and also the 3 card hologram set! When we reached this milestone there was much rejoicing and we read the back of each card as a bedtime story for the kids. 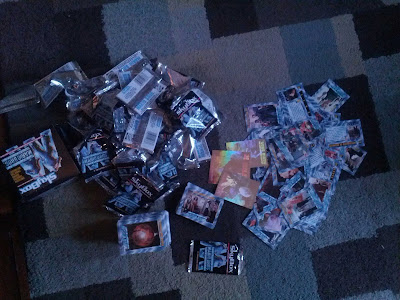 Now that I've told my story, in no particular order here are my favorite cards from this Super trading card set: 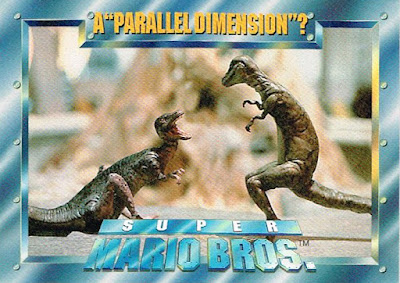 "A Parallel Dimension" (Card #28)
The scene where these 2 mini-dinos are featured happens when the Mario Bros. make their first trip to Koopa Square. These guys are only on screen for a split second, so it's nice to finally have a still picture of them to pour over for as long as I want. Aren't they cute? 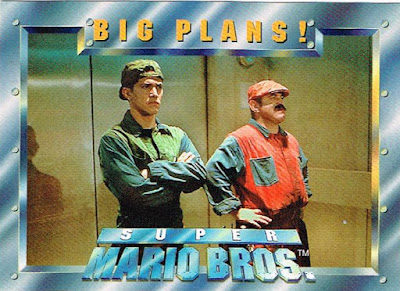 "Big Plans" (Card #62)
For 80% of the movie the Mario Bros. are dressed in either street clothes or vibrant colored dance wear! It isn't until their assault on Koopa Tower that we finally get to see the unstoppable plumbers in their recognizable red & Green garb! I remember getting so excited when this happened on the big screen. I still get that feeling of joy when I look at this card today. 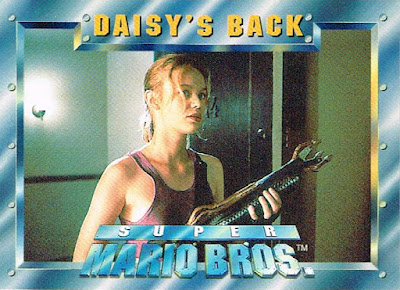 "Daisy's Back" (Card #90)
The scene from this card happens just before the end credits roll. Daisy busts into the Mario Bros. apartment asking for help on another adventure. I assume they did this to lead into a sequel. Man I would've loved seeing a second film with Wart as the main baddie...but wait something is a little off here? 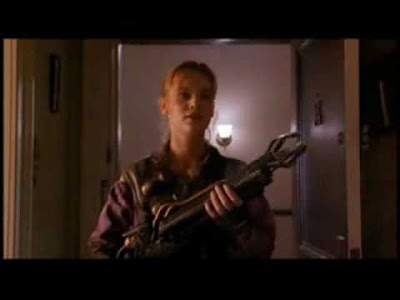 Daisy is in a totally different outfit on the card! They must have changed up the end sequence to make Daisy look more badass in the final version of the movie with her long sleeve shirt and bandolier filled with Bullet Bills! 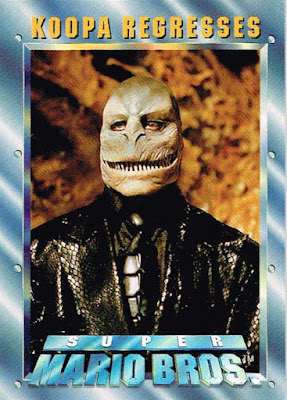 "Koopa Regresses" (Card #86)
This is another blink and you miss it scene in the movie. When Koopa is hit with the Devo Gun (aka Super Scope 6) at the end of the film by Mario and Luigi, he is transformed into a primordial sludge that splashes on the streets. But as he is being transformed, he regresses from his current state to a T-rex in the process! I love this shot! I wonder if Dennis Hopper was under that sweet Halloween mask? 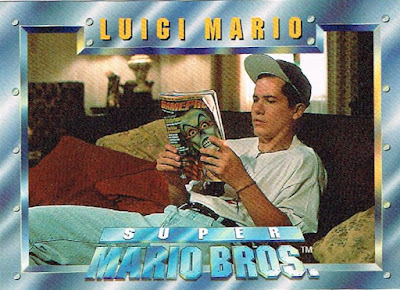 "Luigi Mario" (Card #4)
Not only does this card introduce us to one of our heroes it also shows that Luigi enjoys reading GamePro Magazine! I loved that periodical as a kid. Why don't they make these anymore? 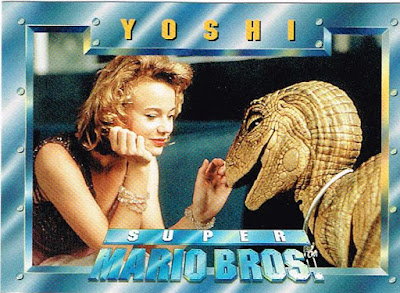 "Yoshi" (Card #52)
For obvious reasons this card was included! Who didn't love Yoshi and to see him come to life in this film was mind shattering. He was so AWESOME and even saved the day by grabbing Lena with his super stretchy tongue! Also Samantha Mathis looks kinda hot is this photo.

That's it! I hoped you enjoyed this look back at one of the weirdest pieces of Nintendo history from the 90s. If you are a fan of Mario and haven't seen this movie, I highly suggest you check it out with an open mind...otherwise you will be very disappointed. After all THIS AIN'T NO GAME! For more info on the strange history of the making of this film, click HERE.