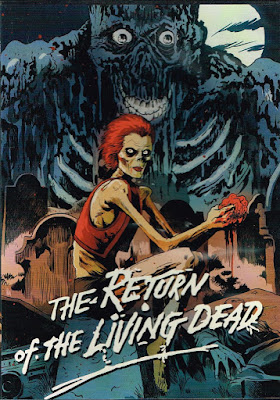 Last year my wife and myself went to the Magic City Monster Con where Linnea Quigley aka Trash from Return of the Living Dead would be making an appearance! We met her and she was a really nice person. I wrote all about it in a past post that you can read by clicking HERE. Seeing her reminded me of my childhood trauma of witnessing the Tar-man eat a punker's brain. I'm pretty sure I was around 10 years old at the time! Well, it had been years since I had seen the movie and my wife had never seen it at all! I was on the hunt to find a copy of Return of the Living Dead! 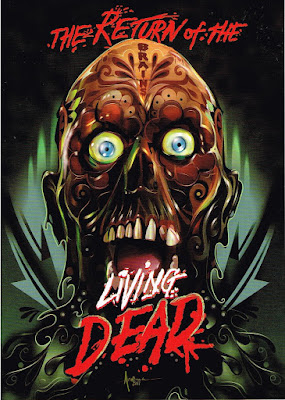 I had heard that it would be re-released along with a slew of other great horror movies. Then I found it at Wal-Mart for the amazingly low price of $5! I love the new special edition packaging these movies are sporting. They have horror icons from Chucky to Carrie done up in a sort of "Day of the Dead" style. Very cool! We watched the movie this past weekend as part of our Halloween movie fest, and it had more humor than I remembered.

I mean how could you not chuckle when the zombie asks for them to send more paramedics...for them to eat! And damn, that Tar-Man still scares the crap out of me! I guess that's the point of these movies to have fun and enjoy the ride! Here are 3 moments that I loved from Return of the Living Dead! These clips are not for younger viewers. Viewer discretion is advised!

After two bumbling medical supply warehouse workers named Freddy & Frank accidentally open a military canister containing a reanimated corpse, all of the dead things in their office start coming to life! This includes cadavers for medical research, 1/2 dogs used for vet studies and even pinned butterflies start flapping their wings! It's crazy and funny watching these two try and contain the latest zombie outbreak especially when they smack a reanimated dog with a crutch!

UGH! This is another scene that terrified me as a kid! While Scuz, one of the punks in the film is being attacked by a zombie, the rest of the team manages to pull him back through a busted window and into their mortuary sanctuary. Unfortunately the zombie that was attacking him is pulled in also. Ernie, the guy who runs the mortuary thinks it would be a good idea to strap the zombie down and ask it a few questions. This is where I learned that eating brains eases the pain of being dead!

The damn Tar-Man! The actor who portrayed the Tar-man did an amazing job with the body movements and really gave the feeling that this guy was ready to fall apart at any moment, but that wouldn't stop him from ingesting some brains first! 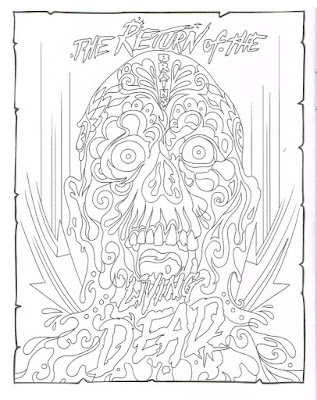 Well, those are some of my favorite moments from Return of the Living Dead. If you have never seen this movie I highly recommend it for the Halloween season. Now that I own a copy, it will be a staple of my fall viewing for years to come! Now take some time and enjoy this coloring page of the cover art!