The comic book I am most excited to read this week is...
IRON CAT #1 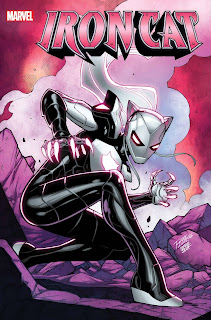 (W) Jed MacKay (A) Pere Perez (CA) Ron Lim
The Iron Cat armor made its first appearance in BLACK CAT #11 but both Black Cat and Iron Man thought that was the last they would see of it. If Felicia is surprised to see the armor again, you can imagine how furious Tony is. There's someone new in the Iron Cat armor and they have a plan that will put them in the crosshairs of all the heroes of the Marvel Universe. Both Iron Man and Black Cat's secrets and mistakes are going to come back to haunt them and it's going to get ROUGH! Don't miss this fantastic new miniseries!
SRP: $4.99
Synopsis Provided By: PreviewsWorld.com
Posted by Spyda-Man at 3:30 AM 4 comments:

Throw on your swimsuit, and head to the block party as we take you back to the 90s! Without further ado, here is the 20 Years Before 2000 THROWBACK JAM OF THE WEEK!

Email ThisBlogThis!Share to TwitterShare to FacebookShare to Pinterest
Labels: 90s, Jam of the Week, So So Def

The comic book I am most excited to read this week is...
BLACK ADAM #1 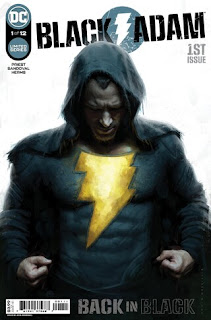 (A) Rafa Sandoval (W) Christopher Priest
There is no forgiveness for Black Adam. This is the reality Teth-Adam, immortal man of indomitable will, must face when he discovers he has been infected with an incurable plague destroying his immortality. Haunted by the specter of centuries of dark deeds, Black Adam transfers his powers to a worthy successor who will redeem Adam’s legacy and defend their ancestral homeland of Kahndaq, only to subsequently become mystically “handcuffed” to him when Adam’s plague is arrested, giving birth to perhaps the most volatile and dysfunctional super-team in DC history! Powered by stunning art by Rafa Sandoval (Justice League) and breathtaking painted covers by Irvin Rodriguez (Detective Comics), writer Christopher Priest (Deathstroke, Justice League) brings his trademark wit and skill for character deconstruction to an entirely fresh examination of the man you love to hate! Get ready to ride the lightning!
SRP: $3.99
Synopsis Provided By: DCcomics.com
Posted by Spyda-Man at 3:30 AM No comments:

Throw on your hoodie & bandana, and head to the Garden State as we take you back to the 90s! Without further ado, here is the 20 Years Before 2000 THROWBACK JAM OF THE WEEK!

Email ThisBlogThis!Share to TwitterShare to FacebookShare to Pinterest
Labels: 90s, Jam of the Week, Rap

The comic book I am most excited to read this week is...
CAPTAIN AMERICA: SENTINEL OF LIBERTY #1 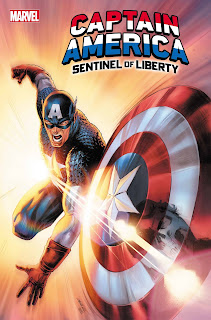 (W) Collin Kelly (A/CA) Carmen Carnero
"The shield isn't what you think. It's not your symbol. It's theirs."
The shield is one of the most iconic images in the world. It stands for hope, justice and the protection of the innocent. It also holds a secret, undiscovered until now, that will change the way Steve Rogers views the 20th century...and how he chooses to fight in the 21st. Nothing is what it appears in this game-changing Captain America run by Jackson Lanzing and Collin Kelly (KANG THE CONQUEROR) and Stormbreaker Carmen Carnero (MILES MORALES: SPIDER-MAN, CAPTAIN MARVEL, STAR).
SRP: $4.99
Synopsis Provided By: PreviewsWorld.com
Posted by Spyda-Man at 3:30 AM No comments:

Throw on your Baddest oversized jersey, and get your hair braided as we take you back to the 90s! Without further ado, here is the 20 Years Before 2000 THROWBACK JAM OF THE WEEK!

Artist: Coolio
Song: 1,2,3,4 (Sumpin' New)
Album: Gangsta's Paradise (1995)
Peak Billboard Hot 100 Position: 5
Bonus Fun Facts: This song had a second video made where Coolio is assisted in the rapping department by the Muppets!
Posted by Spyda-Man at 3:30 AM 2 comments:

Email ThisBlogThis!Share to TwitterShare to FacebookShare to Pinterest
Labels: 90s, Jam of the Week, Muppets, Rap

The comic book I am most excited to read this week is...
DARK CRISIS #1 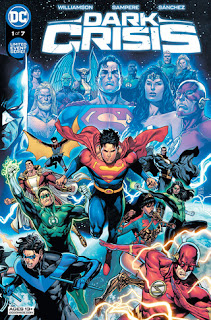 (A) Daniel Sampere (W) Joshua Williamson
Crisis on Infinite Earths. Infinite Crisis. Final Crisis. And now…Dark Crisis! The epic event years in the making is finally here! Superman, Batman, Wonder Woman, and the rest of the Justice League are dead. The remaining heroes are left to protect the world from an onslaught of violent attacks by DC’s greatest villains! Can the legacy heroes step out of the shadows of the classic heroes to form a new Justice League? And will that be enough to stop a darkness greater than anything they’ve ever faced from destroying everything? Don’t miss out on the first issue of the blockbuster event of the summer!
SRP: $5.99
Synopsis Provided By: DCcomics.com
Posted by Spyda-Man at 3:30 AM No comments:

Throw on your Baddest Plaid Shirt, and head to the local rave as we take you back to the 90s! Without further ado, here is the 20 Years Before 2000 THROWBACK JAM OF THE WEEK!

Artist: Cypress Hill
Song: Insane In The Brain
Album: Black Sunday (1993)
Peak Billboard Hot 100 Position: 19
Bonus Fun Facts: This song made it all the way to #1 on the Billboard "US Hot Rap Songs" chart and according to Cypress Hill member B Real, it was a diss song in response to Chubb Rock's 1992 album "I Gotta Get Mine Yo"!
Posted by Spyda-Man at 3:30 AM 4 comments:

Email ThisBlogThis!Share to TwitterShare to FacebookShare to Pinterest
Labels: 90s, Jam of the Week, Rap

I have been a fan of Stranger Things since it debuted on Netflix in 2016, so the 3 year wait for season 4 was killing me! I loved season 3, but it left me wanting more. Luckily for us fans part 1 of season 4 dropped last week and I really enjoyed watching it with my wife and daughter. I got both of them hooked on the show and have even sucked them in to all the tie ins that have come along with the success of Stranger Things. Nothing can top the Baskin Robbins marketing from 2019 when they transformed their stores into Scoops Ahoy Ice Cream parlors, but I was excited to see this cryptic web page pop up for Domino's a few weeks ago. 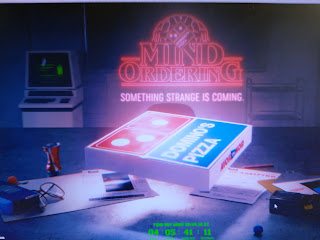 I was hoping we would get a fantastic 80's themed, interactive version of Domino's pizza stores, but that was not to be. We got a fairly lame "Mind Ordering" app that doesn't even work on my phone for some compatibility reason! In my opinion the app was a bust, but at least we got... 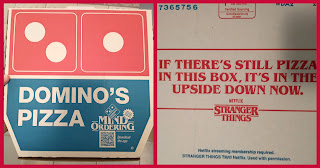 these SWEET retro 80's Domino's Pizza boxes. The boxes hide all sorts of little Stranger Things Easter eggs. If you get one, I suggest you check every nook & cranny for some Hawkins inspired fun! The other cool thing about this promotion was the ad promoting the campaign. It features Dustin & Lucas going to their local Domino's, when all of a sudden strange things start to happen!
The app may have been a miss for me, but this promotional campaign was a sure fire home run! The next cool food tie-in for Stranger Things season 4 came to us courtesy of Doritos! 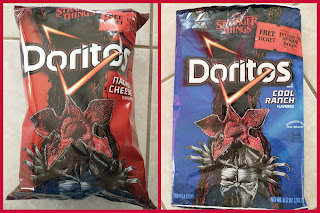 Each bag of Doritos is adorned with the creepy image of a Demogorgon getting ready to strike. I love the design of this villain. It is one of the coolest monster creations that I have seen in a long time, but just as the evil of the Upside Down has spread all over Hawkins... 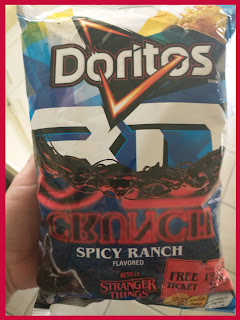 the Stranger Things branding made it's way over to the Doritos 3Ds bags! I have never tried this "Spicy Ranch" flavor before, but it is fantastic! Myself and my daughter snacked on these while we watched the first few episodes of season 4 and we were not disappointed in the flavor or the excitement of the new season! You may have noticed the "FREE TICKET" graphics on each of these bags and that's the really cool thing about this crossover. On June 23rd there will be a concert "Live From The Upside Down" featuring Corey Heart, Soft Cell, The Go-Go's and for some unknown reason Charlie XCX. You get to view this streaming concert for free after you scan your bag of Doritos. You better believe I already scanned and have my passes ready for the show! Check out the add below for more deets on this concert event!
Another oddity from the rush of Stranger Things foods are these Skinny Butcher "Crazy Crispy Chick'N Nuggets". 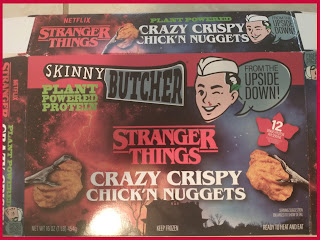 From what I've seen so far, there is no tie to the show. Nobody eats these nuggets, the Skinny Butcher is not a brand from the show and were "Plant Based" meat items even a thing in the 80's? Anyway, I was suckered in based on the Stranger Things logo on the box and honestly, these weren't that bad. My wife threw them in the air fryer and my kids even enjoyed them. Still scratching my head on the connection to Stranger Things though? Do they raise plant based chickens in the Upside Down? 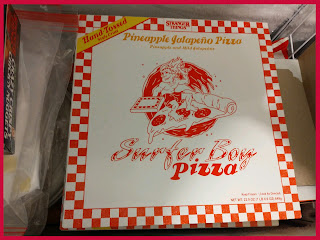 By far, my favorite Stranger Things Season 4 food has to be these Surfer Boy frozen pizzas from Walmart. Surfer Boy Pizza is a fictional California based pizza place created specifically for the show. Jonathan's friend Argyle works at the shop and acts as the comedic relief during the gang's trip across America to find Eleven. I like his character. He has some flaws, but hey, we all do! Anyway, back to the pizza, Surfer Boy Pizza comes in 4 flavors: Pineapple Jalapeno, Pepperoni, Supreme and Multi-Meat. So far we have tried the Pineapple Jalapeno & Multi-Meat. They are not bad! If you feel like calling Surfer Boy Pizza in an attempt to order your own za, you can actually call Argyle at 805-45-PIZZA and don't forget to try before you deny!
That's it for now. I can't wait for Part 2 of Season 4 to drop on July 1st! It's gonna be AMAZING!!! Is anyone else hungry now?
Posted by Spyda-Man at 3:30 AM 2 comments:

The comic book I am most excited to read this week is...
STRANGER THINGS: KAMCHATKA #3 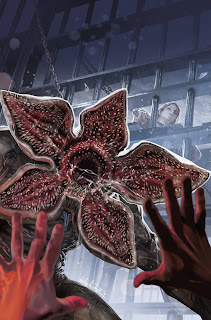 (W) Michael Moreci (A) Todor Hristov (CA) Ashley Witter
As a Soviet double agent breaks his cover to help a leading scientist's two children escape from the KGB, he takes a journey into his past to make amends for his biggest regret. Meanwhile, the Demogorgon's keeper uses her "pet" to test the scientists' loyalty. Tie-in to season 3 finale of hit Netflix TV series.
SRP: $3.99
Synopsis Provided By: PreviewsWorld.com
Posted by Spyda-Man at 3:30 AM 2 comments: