The comic book I am most excited to read this week is...
TMNT: ARMAGEDDON GAME #1 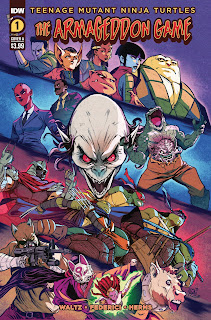 (W) Tom Waltz (A/CA) Vincenzo Federici
The Armageddon Game Has Begun! Under the leadership of the Shredder, the TMNT begin a dangerous quest to seek out allies against Rat King's trio of terror: LeatherKrang, Baxter Stockman, and Madame Null. It's a mission that will see the Turtles spread out across New York City... and across multiple dimensions! But they better hurry, because their enemies are already on the march, and things are not looking good for Mutant Town while most of our heroes are away. Desperate measures, false flag attacks, mysterious new villains, and unexpected alliances... It all starts here in the premiere issue of the biggest TMNT event of the year!
SRP: $5.99
Synopsis Provided By: PreviewsWorld.com
Posted by Spyda-Man at 3:30 AM No comments:

Throw on your darkest tinted shades and head to Lover's Lane as we take you back to the 90s! Without further ado, here is the 20 Years Before 2000 THROWBACK JAM OF THE WEEK!

Email ThisBlogThis!Share to TwitterShare to FacebookShare to Pinterest
Labels: 90s, Jam of the Week, R&B 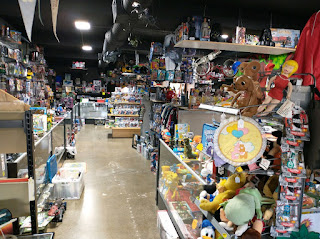 Recently a co-worker told me about a new retro toy shop that opened in town. You better believe that's where I took my lunch break that day. There was a ton of great stuff to look at and I had limited time to do so. I will have to go back and take a longer look at some of the stuff in this store. The prices were a little bit all over the place. Some things were priced too high and some were surprisingly affordable. In my haste to squeeze this trip in, I did find a few solid pick-ups in the comic book bins. Here is what I grabbed: 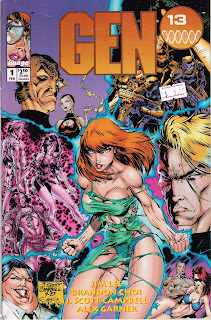 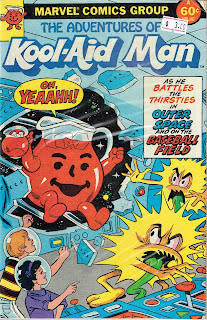 The Adventures of Kool-Aid Man #1 (Marvel) 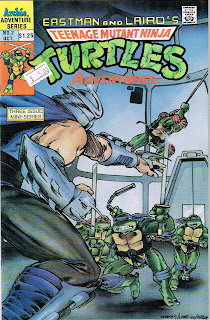 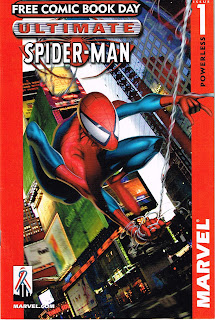 Ultimate Spider-Man FCBD #1 (Marvel)
I always love finding some sweet deals on new comic books and you know I couldn't leave without picking up a new TMNT item for the collection. I looked at their selection of vintage TMNT toys and saw a carded Venus for $150! The card was a little beat up and I already have the loose figure, so I passed this up and my wallet thanked me. As I continued looking around, I noticed randomly placed boxes of Non-Sport cards around the store, but something caught my eye more than the others... 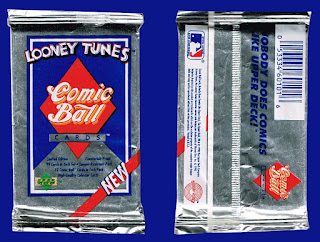 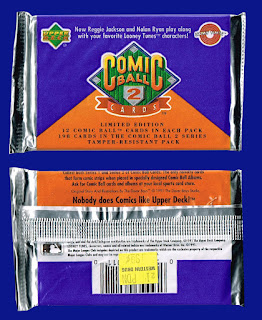 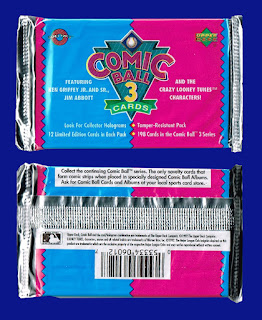 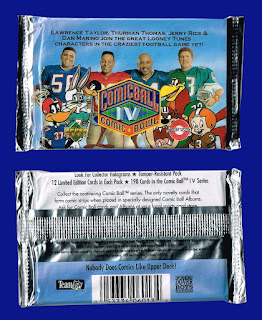 Upper Deck Comic Ball Cards: Series #4
Sealed packs of Upper Deck Comic Ball cards! I grabbed one pack from all 4 series for $1 each! I loved these cards as a kid. This was Space Jam before Space Jam existed. Once you collected the whole set, you were treated to a comic book style story that featured the Looney Tunes and some huge names from the 90's spots scene. Included were stars like Ken Griffey Jr., Reggie Jackson, Thurman Thomas & Jerry Rice to name a few. I remember pulling a Wile E Coyote hologram from one of these packs years ago and feeling like I was a Goonie that just discovered the Inferno! Loved these cards then and still love them now! Hopefully, I'll be back soon to see what other treasures I can uncover!
Posted by Spyda-Man at 3:30 AM 4 comments:

The comic book I am most excited to read this week is...
THE LEGEND OF ZELDA: TWILIGHT PRINCESS #10 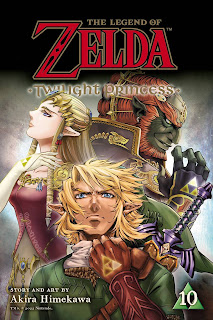 (W) Akira Himekawa (A) Akira Himekawa
Sensing that total victory and the total destruction of Hyrule is within his grasp, Ganondorf unleashes his armies. Link, Midna, their friends, and many others they have met on their journey now fight side by side to save the land. Even some former enemies find themselves allied with Link as he presses on into the heart of Ganondorf's stronghold. When Link confronts Ganondorf, defeating him will take every ounce of skill and courage he has...
SRP: $9.99
Synopsis Provided By: PreviewsWorld.com
Posted by Spyda-Man at 3:30 AM No comments:

Throw on your Phattest Earrings and head to the dance club as we take you back to the 90s! Without further ado, here is the 20 Years Before 2000 THROWBACK JAM OF THE WEEK!

Email ThisBlogThis!Share to TwitterShare to FacebookShare to Pinterest
Labels: 90s, Jam of the Week, R&B

The comic book I am most excited to read this week is...
EDGE OF SPIDER-VERSE #3 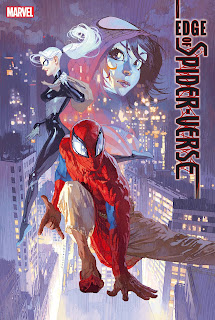 (W) Dan Slott, Various (A) Hikaru Uesugi, Various (CA) Josemaria Casanovas
IN THIS ISSUE! SPIDER-MAN: INDIA! AND NIGHT-SPIDER! Wait, WHO IS NIGHT-SPIDER?!
SRP: $4.99
Synopsis Provided By: PreviewsWorld.com
Posted by Spyda-Man at 3:30 AM No comments:

Throw on your Timberland Boots and head on a quest as we take you back to the 90s! Without further ado, here is the 20 Years Before 2000 THROWBACK JAM OF THE WEEK!

Email ThisBlogThis!Share to TwitterShare to FacebookShare to Pinterest
Labels: 90s, A Tribe Called Quest, Hip-hop, Jam of the Week 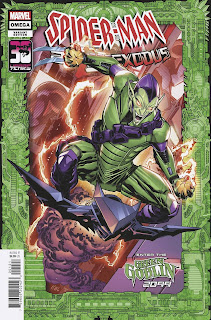 (W) Steve Orlando (A) Paul Fry (CA) Ken Lashley
THE 30TH ANNIVERSARY OF 2099 REACHES ITS EXPLOSIVE CONCLUSION!
The final battle for the Celestial Garden begins! Spider-Man vs. Norman Osborn! The X-Men vs. the Cabal! Two armies, two deadly enemies...and the keys to 2099's future up for grabs! It's a brawl for all: A brave new tomorrow for 2099 starts here!
SRP: $4.99
Synopsis Provided By: PreviewsWorld.com
Posted by Spyda-Man at 3:30 AM 2 comments:

Throw on your Peace necklace and head to the funkiest place you can find as we take you back to the 90s! Without further ado, here is the 20 Years Before 2000 THROWBACK JAM OF THE WEEK! 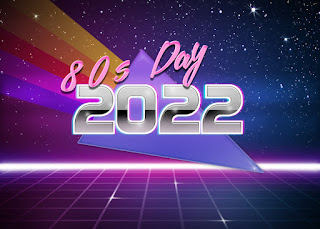 80's Day was something I started years ago to show my kids how cool the decade was. I share some of my favorite 80's music, movies, video games and food with them and they seem to really enjoy it! Typically we head out and take part in some activities that I liked to do as a kid. The recreation may not be 100% faithful to what life was like back in the 80's, but I feel like we did the best we could with the resources we had available. Here's a re-cap of what we did in 2022! 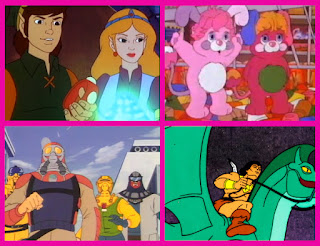 We started the day as most kids in the 80's did, eating cereal in front of the TV while watching cartoons! Here is what the lineup consisted of: The Legend of Zelda, Popples, M.A.S.K. and Blackstar! Every year I pick a semi-obscure cartoon from my youth for my kids to view. Of course they know He-Man, Ninja Turtles and Transformers, but they were all scratching their heads when Blackstar hit the screen. As was the case with the Centurions viewing last year, I don't think I created any new Blackstar fans. They correctly identified it as a "Bootleg Masters of the Universe" that was done by the same company, Filmation. Anyway, you can view the episode we watched at the YouTube link below:
After cartoons it was time to throw on some of our best 80's licensed character t-shirts, so we could go out and hit the town! Represented in my kids' attire were the Care Bears and The Legend of Zelda. I chose to wear my Mirage Teenage Mutant Ninja Turtles shirt and my wife had her Jem shirt on. 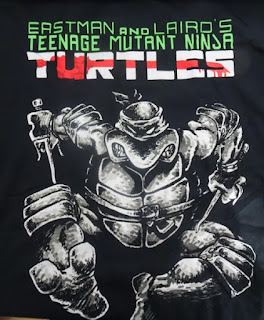 Looking good and ready for some adventure! We hopped in the van and the soundtrack for the day would be a random assortment of CDs containing some of the biggest hits from the 80's! My kids favorite, which led to a car ride sing along, was "The Goonies 'r' Good Enough" by Cyndi Lauper!
Our first stop of the day was the local comic shop! I picked a Spider-Man book and let the kids each pick out an item. I know it's not 80's, but my twins each picked a pack of Pokemon cards and my oldest daughter grabbed a Stranger Things book. It had been a while since I had taken them to the comic shop and they had fun perusing the shelves and looking for something new to read and help with their overflowing Pokemon collection. 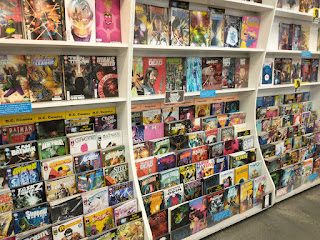 Next we went to the mall and hit up Gamestop to check out the latest games for our Switch and then we headed to the candy store. I let them each pick out a Pez dispenser and I grabbed some gummy bug candies. 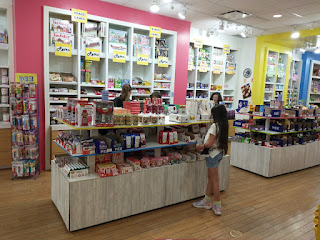 I love how the 80's was represented with everything from Warheads to Whatchamacallit candy bars to these awesome looking Golden Girls mints! 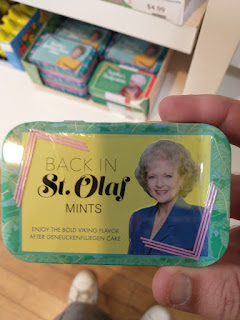 By this time we were ready for lunch, so we hit up McDonalds and the kids all grabbed cheeseburger Happy Meals, my wife got a spicy chicken meal and I got a Double Quarter Pounder Meal. Again, my kids were jumping with crazy joy to find out the toy this time around was Pokemon cards! Yay! More Pokemon cards!!! It was pretty cool that we did get the table with the video games built in though! 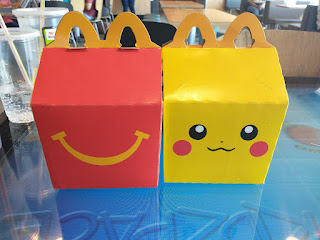 Usually we go home and play some retro NES, Super NES and Atari video games, but this year I asked the kids if they wanted to go to the local arcade. They rejected that idea, but they did suggest going to Chuck E. Cheese and playing some games there. Who am I to argue with that! 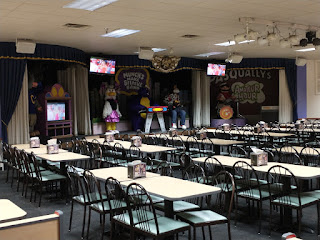 We actually had a ton of fun and they had some pretty cool games including Guitar Hero, Monopoly and of course Skee-Ball! 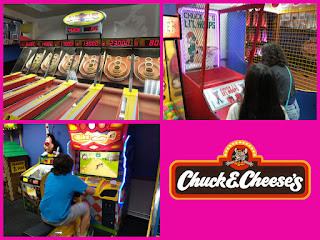 My kids had something like 5,000,000 tickets which was just enough for them to get a few Tootsie Rolls, some stickers and a small plastic Chuck E. figure. Next time maybe we'll stay for the show and grab some pizza! 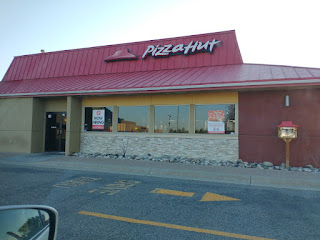 Speaking of pizza, it was close to dinner time by the time we left Chuck's, so we stopped by an old 80's staple...PIZZA HUT! 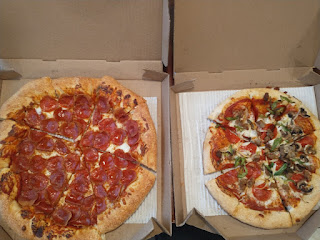 We got a stuffed crust peperoni pizza and a traditional supreme pie. We were going to eat in the restaurant, but when we walked in we were told that due to the lack of staffing the dining area was closed! Oh well, I guess we'll take it home. 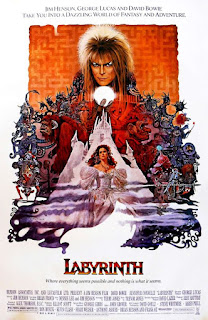 When we got home, we dished up and prepared for the night's feature presentation, the 1986 classic...Labyrinth! The kids had seen this movie before, but it had been a while and there was so much that they forgot about. They laughed and thoroughly enjoyed this masterpiece of a film by Mr. Jim Henson featuring catchy tunes by David Bowie. Overall it was another successful 80s day that was enjoyed by all. I know I say this every year, but hopefully next year we can make it bigger and better!
Posted by Spyda-Man at 3:30 AM 5 comments: