Throw on your Track Suit and head to shake your derriere as we take you back to the 90's! Without further ado, here is the 20 Years Before 2000 THROWBACK JAM OF THE WEEK!

Artist: Tag Team
Song: Whoomp! (There It Is)
Album: Whoomp! (There It Is) (1993)
Peak Billboard Hot 100 Position: 2
Bonus Fun Fact: This song has been certified 4x platinum with over 4,000,000 copies sold! A remix version titled "The Addams Family (Whoomp)!" was included in the soundtrack for the 1994 film "Addams Family Values".
Posted by Spyda-Man at 3:30 AM No comments: 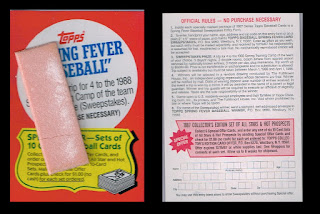 I have loved collecting cards since I was 6 years old. Recently it's been a bit of a hassle keeping up with the hobby by attempting to actually locate products or seeing the huge prices secondary sellers are trying to get. Regardless, I still enjoy opening a fresh pack of cards whether it be baseball, basketball or Garbage Pail Kids! Recently I was sitting in my basement with my kids going through some of my collection and I realized that I have some pretty cool non-sports cards. Today, I'd like to share a few of those cards with you. Let's begin! 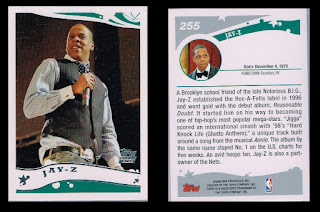 2005 Topps #255
In the 2005 Topps basketball series you would find these "Rookie" cards of celebrities. Some of the celebs included were Shannon Elizabeth, Carmen Electra and Jay-Z. Not sure why these folks were included in several Topps sets that year, but at least I now own a unique card of one of the dopest MCs of all-time! 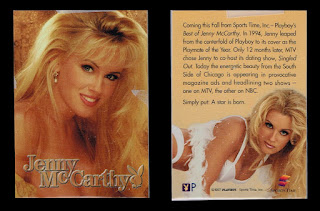 1997 Sports Time Playboy #P
In the 90's I was a teenager, therefore I was a big Jenny McCarthy fan. I had her posters on my wall, watched "Singled Out" on MTV and also had a few of her *ahem* magazine appearances under my bed. I found this card on ebay for $1 and it reminded me of those early days of my youth. I have never seen any other cards from this set and the only Playboy card in my collection is this promo card...for nostalgia reasons of course. 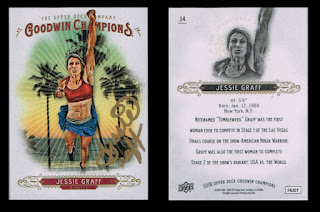 2018 Upper Deck Goodwin Champions #34
My kids and I are big fans of the American Ninja Warrior show on NBC. My kids even went to a "Ninja" gym for a few years, so when the opportunity arose for me to take my kids to meet one of their idols Jessie Graff...we took that opportunity! My work was sponsoring a speaking engagement featuring Jessie Graff and former NFL player/Ninja Warrior host Akbar Gbajabiamila and we were invited to a VIP meet and greet with them. I bought these cards immediately so my kids could get them autographed. We all had an amazing time and Jessie took about 20 minutes of her time to sit and talk with my kids before signing their cards and taking some photos. It was fantastic and they still talk about the experience to this day! 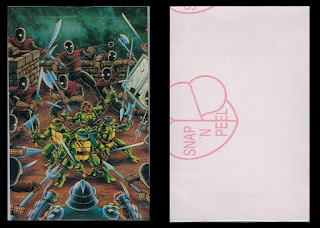 1990 TMNT Soundtrack Sticker
Anyone who was a Teenage Mutant Ninja Turtles fan in the early 90's knows what this is. Every copy of the TMNT Movie soundtrack included one of these stickers. My original sticker that was in the cassette tape me and my brother bought ended up in a sticker book somewhere. Luckily when I recently purchased a CD copy of the TMNT Movie soundtrack, the sticker was still inside! I slipped it into a top loader case at it remains there for me to take out and admire from time to time. 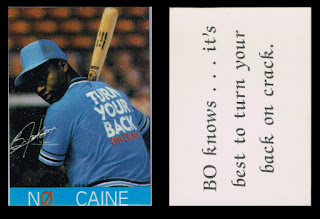 Bo Jackson - No Caine
Okay, this one is kind of a cheat since it includes Bo Jackson, but it is so odd that I had to include it here! Some people have told me this was handed out at ball games back in the 80's, others told me it was a poster of this card that was handed out and this was a bootleg card of that poster that was made to capitalize on Bo Jackson's popularity. I don't know the origins of this card and honestly I don't care. It's an odd piece to have in my Bo collection that teaches us all an important lesson...TURN YOUR BACK ON CRACK! Thanks for reading! Did you collect non-sports cards back in the day? If so, let us know what your favorite sets to collect were in the comment section below.
Posted by Spyda-Man at 3:30 AM 2 comments:

The comic book I am most excited to read this week is...
JUSTICE LEAGUE vs. THE LEGION OF SUPER-HEROES #1 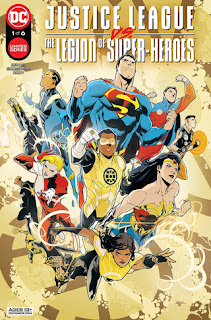 (W) Brian Michael Bendis (A) Scott Godlewski
One thousand years in the future, a Legion of Super-Heroes comes together to dedicate their lives to recapturing the great age of heroes of the 21st century. When the heroes discover that reality is falling to a great darkness in both times simultaneously, the Justice League and the Legion of Super-Heroes must team up to stop it all. But what is the connection between the secrets of the new Gold Lanterns and the coming of the Great Darkness? A monumental DC epic event miniseries!
SRP: $3.99
Synopsis Provided By: DCcomics.com
Posted by Spyda-Man at 3:30 AM No comments:

Throw on your Flannel Shirt and head to the blacktop as we take you back to the 90's! Without further ado, here is the 20 Years Before 2000 THROWBACK JAM OF THE WEEK!

Artist: Warren G feat. Nate Dogg
Song: Regulate
Album: Regulate...G Funk Era (1994)
Peak Billboard Hot 100 Position: 2
Bonus Fun Fact: This song was featured on the "Above The Rim" movie soundtrack and includes samples from the Michael McDonald song "I Keep Forgettin' (Every Time You're Near)". The spoken dialogue in the beginning of the song is taken from the film "Young Guns"!
Posted by Spyda-Man at 3:30 AM No comments: 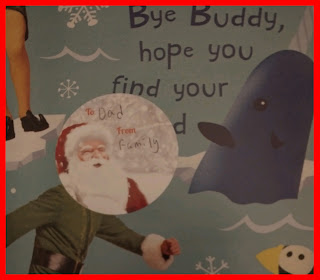 Now that I am a parent Christmas is mostly all about making the kids happy and helping Santa get them the toys that were on their list. There is nothing like seeing their little faces light up on that special December morning...even if it's at 4am. I guess that's karma, but every year I still look forward to unwrapping my own gifts from my kids & wife. They typically do a great job of getting me some sweet presents and this year they did not disappoint. I know it's a little late, but lets look behind the wrapping paper and see what goodies were under the tree for me this year! 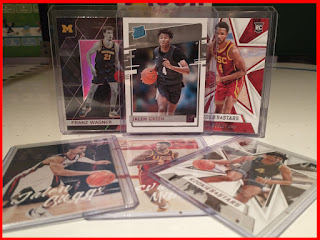 Basketball Cards
I love collecting basketball cards and have been doing so since I was about 10 years old. I'm always down for opening a few packs whether they are new or old wax packs. This year I got a few of the top rookies and I was happy we were actually able to find a box on the shelves at Walmart. 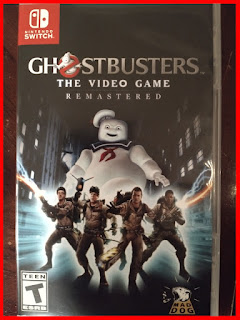 Ghostbusters: The Video Game
I was really excited to get this game. I have the original for the Wii, but this version blows that one out of the water! The graphics are fantastic, the story is fun and hearing the entire Ghostbusting crew back together is amazing! 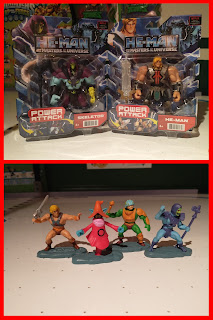 He-Man Figures
I actually enjoyed watching the new Masters of The Universe cartoon on Netflix with my kids. Yes, it is more of a kid friendly and safe option and the creators changed quite a bit from the original, but the action, humor and adventure are still there. My wife also got me the sweet MOTU mini figures from the Dollar Tree. For $1, these are some pretty well done figures! 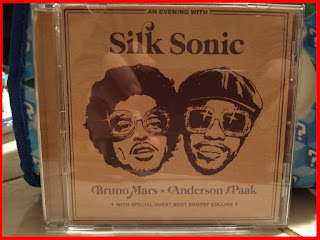 Silk Sonic CD
I've been a fan of Bruno Mars for a while and Anderson Paak just recently made it onto my radar add in some Bootsy Collins and I am sold! Some good funk & soul jams on here. 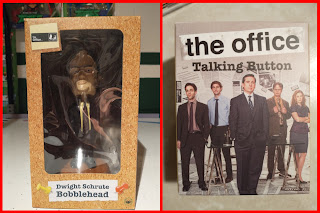 The Office Items
I love The Office, so my wife got me a Dwight Schrute bobblehead an official The Office "Talking Button" that spews out icon lines from the show when you push down on it. The fact that it is shaped like a stapler in a Jell-O mold only makes this impulse item cooler. 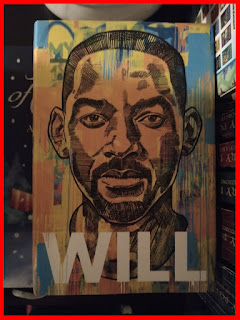 Will by Will Smith
I have been following Will Smith's career since I feel in love with his fresh rhymes on the 80's jam "Parents Just Don't Understand". I watched "Fresh Prince of Bel-Air" religiously on Monday nights on NBC and have seen the majority of his movies. It should be cool to dig a little deeper into the life of one of my favorite MCs. 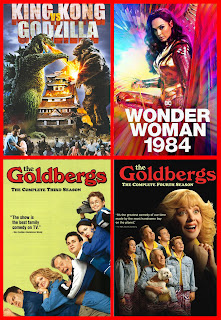 Movies
The fam picked me up the original King Kong vs. Godzilla from 1962, Wonder Woman 1984 and The Goldbergs Seasons 3 & 4. Got a little bit of watching to do! Well, that's it for this past Christmas. I hope yours was merry, bright and full of good tidings. Merry Christmas!
Posted by Spyda-Man at 3:30 AM 4 comments:

Email ThisBlogThis!Share to TwitterShare to FacebookShare to Pinterest
Labels: Cards, Christmas, Fresh Prince, Ghostbusters, Masters of the Universe, The Office, Will Smith

The comic book I am most excited to read this week is...
AMAZING SPIDER-MAN #84 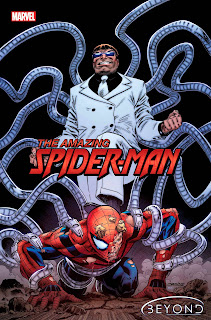 (W) Cody Ziglar (CA) Cory Smith
The events of ASM #80.BEY have set Doctor Octopus on a collision course with the Beyond Corporation and their Spider-Hero in residence. Ben Reilly isn't the only one with new tricks up his sleeve, or, in Ock's case, MANY sleeves.
SRP: $3.99
Synopsis Provided By: PreviewsWorld.com
Posted by Spyda-Man at 3:30 AM No comments:

Throw on your Bow Ties and head to the prehistoric era as we take you back to the 80's! Without further ado, here is the 20 Years Before 2000 THROWBACK JAM OF THE WEEK!

Artist: Was (Not Was)
Song: Walk The Dinosaur
Album: What Up, Dog? (1987)
Peak Billboard Hot 100 Position: 7
Bonus Fun Fact: This song had a cover by George Clinton that appeared on the Super Mario Bros. movie soundtrack in 1993!
Posted by Spyda-Man at 3:30 AM No comments: