The year was 1987 and some of the hottest toys on the schoolyard were G.I. Joe action figures! Every one of my friends had G.I. Joes. The thing that was so great about this toy line was that there were so many Joes to choose from, so everyone had different commandos to send into battle against the evil of COBRA! Since me and my older brother were big into these guys, one year we each found a pair of G.I. Joe Sunglasses in our Easter Baskets. We thought we were as cool as Sergeant Slaughter in those babies!
Unfortunately for me that feeling of unbridled awesomeness and badassery would end all too soon! I foolishly took my G.I. Joe Sunglasses to school and they got lost somewhere? A few days later a kid by the name of Mikey came to school wearing the very same glasses I had. Naturally I thought he stole mine and we got into a fight. Parents were brought in and it turned out Mikey's parents had bought them for him! The mystery of the missing G.I. Joe Sunglasses was never solved, but I think my brother had something to do with it? 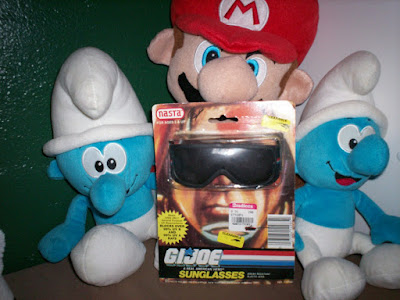 Last year I was able to put the heartache of the 80s behind me when I purchased a pair of G.I. Joe Sunglasses off of ebay for around $3! 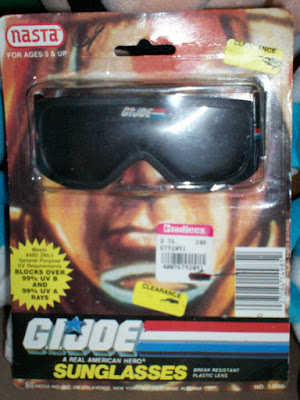 I am totally okay with them still having the old Bradlees and Clearance stickers on them. I believe these just add to the charm. Now I can cross these off of my wish list and Mikey if your out there, I am sorry for fighting you over a pair of plastic sunglasses in grade school...unless you really did steal them, in that case I am not sorry and you got what you deserved. I feel better now and that is half the battle...Right?
Posted by Spyda-Man at 3:15 AM