Saturday, May 4th is Free Comic Book Day! You can go to your local comic shop and choose from a variety of great comics from publishers like Marvel, DC, Darkhorse and more! If you want more info or need to know what shops are participating, check out the Free Comic Book Day website. Every year I take my kids out and make this day an event. It's something we look forward to every year. Here are my top five comics for the 2019 FCBD: 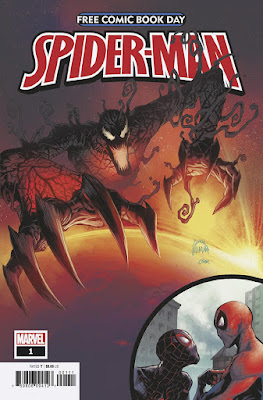 FCBD 2019 SPIDER-MAN
Everyone knows Miles Morales, who rose to fame in Marvel's acclaimed animated sensation Into The Spider-Verse - and with a second feature film arriving this year, Peter Parker will once again suit up to save the world with his web-slinging super powers! In a special FCBD story, creators Tom Taylor, Saladin Ahmed, and Cory Smith take these superstar heroes of the Spider-Verse in a shocking new direction, with a story that will build to one of Marvel's most fantastic and epic tales later this year! 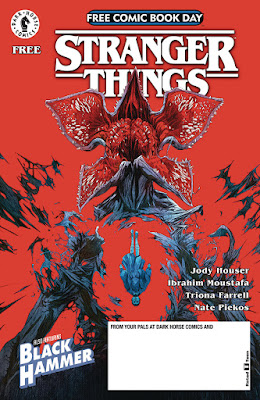 FCBD 2019 DARK HORSE STRANGER THINGS & BLACK HAMMER
Tales from two diverse worlds! In Stranger Things, Eleven and the Demogorgon have disappeared from Hawkins, IN. Steve and Nancy try to cheer Mike up, encouraging him to get the adventuring party back together again. Then, in the world of the Eisner Award-winning Black Hammer series, Madame Dragonfly takes the reader on an EC-style tour through her mysterious Cabin of Horrors to witness two groups of brand-new Black Hammer heroes from the past! 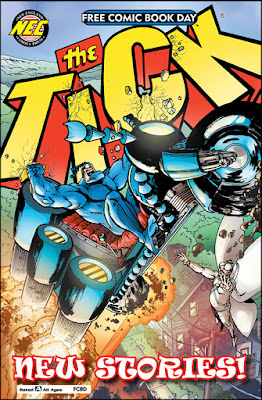 FCBD 2019 THE TICK
The Tick is back for his 10th Free Comic Book Day featuring an ALL NEW story by Ian Nichols! The Tick has always been one of the most popular FCBD comics! Dave has the largest collection of Tick & Arthur memorabilia in the world---except the most rarest "items" of all....Tick & Arthur themselves! Featuring the return of the fan favorite Tick Cycle with its legendary "unnecessary rockets"! The Tick is one of the most successful and longest-running independent comics ever! SPOOOOOOOOOOOON! 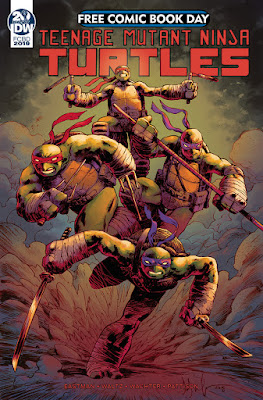 FCBD 2019 TMNT CASUALTY OF WAR
The road to Teenage Mutant Ninja Turtles' 100th issue begins! New York City has just erupted into war as Splinter battles Karai for control of the Foot Clan with the Turtles caught in the middle! Find out how the Turtles got to this point as they battle some of their fiercest foes in this special FCBD offering! 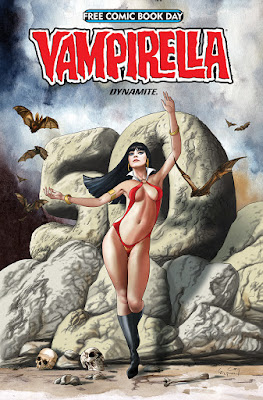 FCBD 2019 VAMPIRELLA 50TH ANNIVERSARY
July 2019 is the 50th anniversary of Vampirella, and to celebrate, Dynamite is relaunching the title that very month, with a very special preview to come in this year's FCBD special, Vampirella #0!  Featuring work by legendary Vampirella creator Forrest J. Ackerman along with legends in the own right, Mark Texiera, Ty Templeton and Bruce Timm, Vampirella #0 will also unveil our lights-out new creative team as they present the prologue to a story so big, we had to hold it for Vampi's birthday!
Posted by Spyda-Man at 3:37 AM