With the new Ghostbusters movie about to drop on July 15th, I felt it was the right time to talk about one of the most vivid memories I have attached to the original Busters...
It was the Christmas of 1986 and Ghostbusters was one of the hottest things any kid could own that year! Me and my brother went to bed the night before with visions of proton packs and marshmallows dancing in our heads. When we woke the next morning, the living room was covered with wrapped gifts of joy, but as we started unwrapping I felt something was a little off. My brother unwrapped the original Kenner action figure of  Peter, then  Ray, then Winston, then Egon, then Stay Puft. 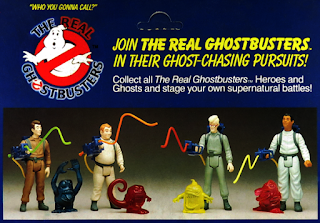 He even scored the Filmation Ghostbuster's House and car! 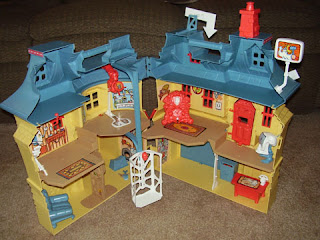 But, where were my Ghostbusters? There must be some mistake? What did I do to deserve this injustice at the age of 6? Was I that bad? I did finally unwrap Slimer, which is a great toy by itself. I can still remember the smell of the rubber pizza as it was taken out of the package. And I don't know if this happened to anyone else, but over the years half the pepperoni pizza paint wore off. I just imagined that Slimer was sharing his pie with Peter, who stubbornly would only eat cheese pizza. Slimer was that special kind of thoughtful ghost.

My parents eventually explained to me that I did have a gift that must not have made it into Santa's bag. They told me I should watch for a brown truck to show up at our house any day now. I watched out that window like a hawk for about two weeks, the damn truck never came! Eventually my parents made good on their promise and I did receive an amazing gift...the legendary LJN Thundercats Lair!!!! 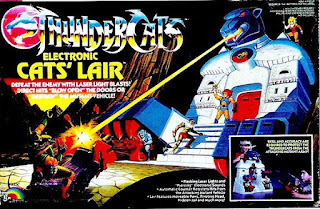 I played the hell out of that toy!!! I guess it was worth the wait, but I will never forget that Christmas of 1986. I still bring it up to this day to my Mom & Dad. Thanks for reading and I hope you enjoyed my first post on 20 Years Before 2000!
Posted by Spyda-Man at 4:01 PM