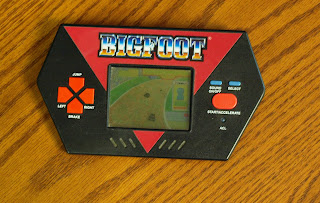 I received this Bigfoot Handheld Game as a gift recently and the memories came flooding back! Bigfoot was huge back in the day! He was in everything from trading card sets, to toys to starring in the "Power Team" Cartoon with Johnny Arcade! I remember seeing the Monster Truck "Winter Nationals" commercials on our local channels. I wanted to go, just to see Bigfoot. I never did get to see him though. I'll have to add this to my bucket list.
This game was released by Akklaim in 1989 and man does it suck! All you do is drive Bigfoot around the same LCD screen track in an attempt to avoid other Monster Trucks! There is no end, you just keep driving. These type of games were almost always given as gifts to kids who asked for a Gameboy. They were cheap and used licensed characters that were in at the time like Batman, The Simpsons and the Terminator. The one great thing that came from these games were the ads! 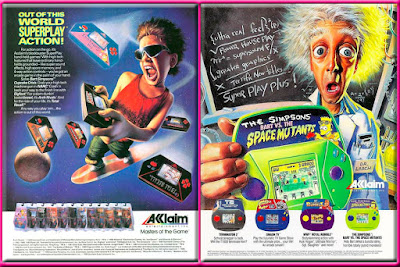 I mean look at these babies! Who wouldn't want to be the crazy, lunatic, cool kid floating through space on a surf board with video games flying around you? The one with the professor, that guy's mind was blown from the new Akklaim Super Play Plus Series! Although most of these games were based on Akklaim games that were released for the NES, the gameplay was much different. Obviously the limitations of an LCD video game were what caused this. Even though the NES games were an upgrade, Akklaim just could not make the most of their licensed properties. Take a look at the Bigfoot NES game below and judge for yourself.
Posted by Spyda-Man at 3:00 AM