In 2014 Paramount and Nickelodeon movies decided to have Michael Bay's Platinum Dunes production company helm a new Teenage Mutant Ninja Turtles movie. I'm not going to lie, I was crazy excited for this movie. It had been years since we had a Ninja Turtles movie hit theaters and that one wasn't the greatest. I had seen the Michael Bay Transformers movies and for the most part I was entertained, this lead me to have some pretty unreasonable expectations for this new incarnation of the Teenage Mutant Ninja Turtles. 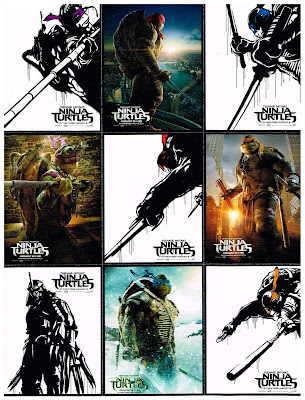 As part of the marketing campaign, these sheets of trading cards were given out at select movie theaters. I was lucky enough to grab one of these sets. The artwork is pretty cool and leads me to ask the question, "Why was there never an official comic book adaptation of the movie released?". 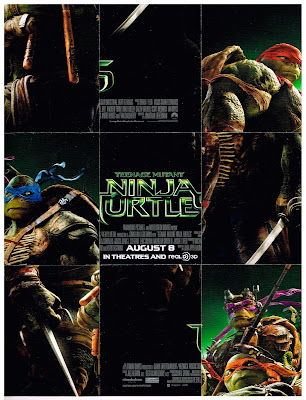 The backs of the cards were puzzle pieces for you to put together after you tore the cards apart. I did not do that. I prefer to keep my set attached. Maybe one day I will frame it? 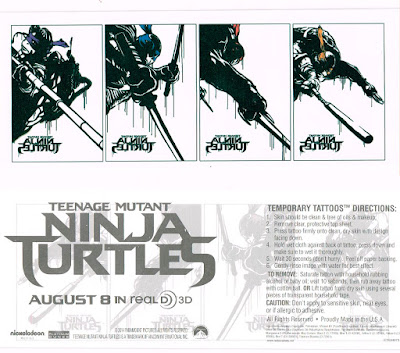 In addition to the 9 card set, these sweet tattoos were also given out! I did eventually see the movie in theaters in 3D. It was better than what I was expecting. I had heard so many bad things about the movie that even a halfway decent film would have surprised me. One of the best things to come from this movie was the song "Shell Shocked" performed by Juicy J, Wiz Khalifa & Ty Dolla $ign. It's no "Ninja Rap", but then again nothing is or ever will be.
Posted by Spyda-Man at 3:33 AM