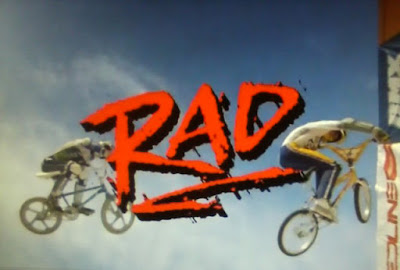 Just a few days ago I commented on a Twitter post that I had never seen the 1986 movie RAD before. It had always been on my list of 80s flicks to watch, but I was never able to find it. To my knowledge it has never been on Netflix and was never officially released on DVD. The only way I could find it was on VHS, but the prices were a little steep. 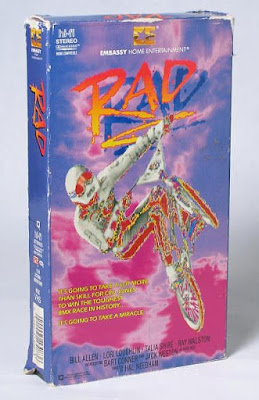 Well, my comments on Twitter got a lot of traction on the interweb and thanks to Shawn Robare, who runs the excellent retro site Branded in the 80s, I was able to get my hands on a copy and rectify 31 years of RADlessness! Here are my 5 favorite parts of the high octane BMX action adventure of Cru Jones as he strives to overtake the Hell Track!
1. The Bicycle Boogie
Back in the day who wouldn't have wanted to boogie with the future Mrs. Jessie Katsopolis, Lori Loughlin? This dance scene was crazy from the sweet BMX "Dance" moves to the song "Send Me An Angel" by Real Life playing at the local teen hot spot. I can honestly say this is something I had never seen before on film! Just looked up some recent pictures of Lori online and DAMN does she still look fine!
2. Lumber Yard chase with the Police
This is possibly my most favorite scene of the movie. The cops roll up, Cru and his gang roll out on their sweet BMX bikes and challenge the local 5-0 to a game of cat and mouse in a lumber yard. Some of the stuff Cru pulls off is insane! He manages to outsmart and outride Sgt. Smith and in the end everything ends with an admiring salute from the law. I wish the cops were like this where I grew up. All we had was officer Allen telling us not to "Piss in his cornflakes"!

3. Mr. Timmer flips off Duke!
I was pleasantly surprised to see Ray Walston aka My Favorite Martian in this movie as Burton Timmer. Mr. Timmer stood to make a lot of money if the #1 seed in the HellTrack race, Bart Taylor won. But when the villain of the film, Duke Best kept changing the rules to keep Cru Jones out of the race, Mr. Timmer stepped up and fronted $27,000 of his money to help out the local boy. When confronted about this choice Mr. Timmer responded to Duke with an enthusiastic middle finger to the face! AMAZING!!!!

4. The Final Race
After proving himself to be a top rider in the qualifying races and overcoming the sponsor and money rules put in place by Duke at the last minute, Cru Jones gets his chance at HellTrack! He starts out in the lead and avoids attempts by the rival Mongoose team to take him out and in the final lap he is overtaken by Bart Taylor who has a strong lead. But in a turn of sportsmanship and cockiness Bart waits for Cru to catch up with him and they race head to head to the finish! [SPOILER ALERT] In the end Cru pulls of a fantastic spin move to beat Bart at the checkered line to win! Cru gets the title, the respect and the girl! The movie ends and we are treated to a highlight reel of BMX tricks, which leads me to my final fave moment....
5. THE SOUNDTRACK!
WOW! If this isn't one of the top ten 80s soundtracks, I don't know what is! It is pure 80s synth greatness and fits the tone of RAD to perfection. Days later and I am still singing "Cause there's thunder in your heart! Every move is like lightning!" If you want to hear more songs from RAD you can check them out on the YouTube RAD playlist by clicking HERE!

There are so many other AWESOME moments from this movie that I may have to do a second round of "My Top 5 Moments from RAD"! Like the team trading homework for t-shirts, Duke drinking what looks like Jack Daniels in the Mongoose tent, Ass Sliding and the epic dance seen with twins Rod & Rex in space suits that were borrowed from the movie "V"! There is so much to like here. If you are an 80s movie fan, I highly recommend finding and watching RAD!  I finished the movie and was left wanting more Cru Jones shenanigans, so now I am on the lookout for my own VHS copy of the movie, the soundtrack and possibly even  a copy of the book "My Rad Career" by Bill Allen. The hunt starts now! This movie has such a cult following that it makes me wonder why it was never released on DVD or BluRay? A new BluRay would be sweet! Just think of all the extras that could be included. A doc on the popularity boom of BMX racing in the 80s, a where are they now look at the stars, a look behind the scenes at the making of RAD and maybe even music videos? I know I am dreaming, but that would be cool, right?
Posted by Spyda-Man at 3:54 AM