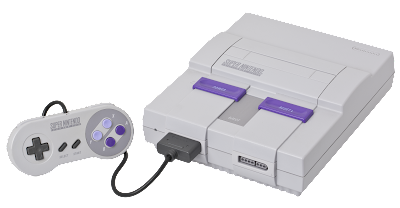 The NES Mini has come and gone. I was one of the lucky few that was able to find one at a retail store and I LOVE IT! In fact, just today me and the kids were playing Double Dragon II, Bubble Bobble and Balloon Fight on it. I just wish there was a way to add more of my fave Nintendo games to it? Well, now all the talk and speculation has come to Nintendo releasing a SNES Mini in time for the 2017 holiday season. If this happens, I want one! Here is my top ten list of games that I would like to see on the console based on how much I enjoyed them as a kid.

The Legend of Zelda: A Link To The Past
(1992, Nintendo)
Honorable Mentions go to: Act Raiser, Donkey Kong Country, Earthworm Jim, Killer Instinct, NBA Jam Tournament Edition and Sim City. I hope you enjoyed that Super Nintendo featuring Mr. Paul Rudd. What games would make it onto your SNES Mini wish list?
Posted by Spyda-Man at 2:51 AM