This week the comic book I am most excited to read is...
MARVEL GUARDIANS OF GALAXY VOL. 2 PRELUDE #1 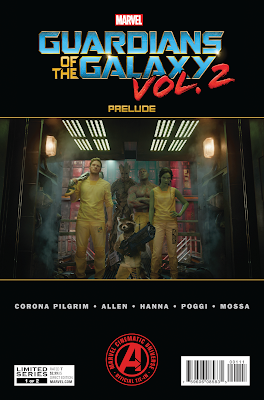 GET HOOKED ON THE GUARDIANS!
When the fate of the galaxy is at stake, there's only one thing to do: call in the greatest warriors the galaxy has ever known. What do you mean, who?!  ROCKET. GROOT. DRAX. GAMORA. PETER QUILL, a.k.a. STAR-LORD?! Don't tell me you've never heard of them?  Legendary outlaw?  Most dangerous woman in the galaxy?  Nothing? Then it's time to brush up for Marvel's Guardians of the Galaxy Vol. 2 with this all-new adaptation of the original, hilarious hit film!
(W) Will Pilgrim (A) Christopher Allen (CA) TBD
SRP: $2.99
Posted by Spyda-Man at 7:38 AM