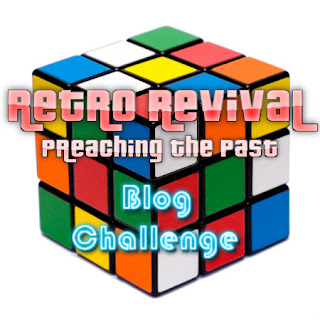 This week the Retro Revival Challenge is to reveal the one annual television event that makes us drop everything we are doing, turn on the TV and become zombies for a few hours! Back in the day there were so many things that were events to us, watching Rudolph at Christmas, The Simpson Sunday nights on FOX and the Super Bowl. But thanks to the invention of DVDs, Netflix, Amazon TV and more, there really isn't any appointment television. I have Rudolph and a hundred other classic Christmas specials on DVD, The Simpsons can be streamed and I have boycotted the Super Bowl every year the Patriots are in it. But there is one event that keeps calling me back...

NBA ALL-STAR WEEKEND!!!! This is the one time of the year where you can see all of the top NBA stars showcase their skills in one place! Ever since I can remember, I used to record the entire All-Star weekend on VHS and rewatch it over and over. Everything from the Slam Dunk Contest to the skills challenge to the game itself. I wish I had those tapes in hand today, I would totally watch those with my kids, not only for the athletic feats, but for the amazing commercials! Here are my top memories from those games:

1991-92: Michael Jordan meets Bugs Bunny for the first time!
Oh man, was this an advertising milestone! Not only did it lead to some awesome kicks, but it also gave us the brilliant "Space Jam" movie! I wonder when that sequel is scheduled to hit? Athletic companies always saved there best commercials for this showcase.

NBA All-Star Game 2000: Vince Carter wins Slam Dunk Championship
These were the dunks that made you jump out of your chair, freak out uncontrollably and then question what you just saw! Vince Carter brought something no one had ever seen before! He did the reverse 360 windmills, a honey dip, and a between-the-legs dunk off a bounced alley-oop from his cousin Tracy McGrady. But he did it with such ease and smoothness it was ridiculous!

NBA All-Star Game 1992: Magic Returns and wins MVP
This was Magic's one and only game that season. This was supposed to be his final game after finding out he was HIV positive. He scored 25 points, 5 rebounds and 9 assists on his way to MVP honors.

NBA All-Star Game 2009: Krypto-Nate defeats Super Dwight
I saw this one go down in 3D! One of the local movie theaters was broadcasting the event in 3D and even though it was on Valentine's weekend, my wife bought us tickets to see the contest. It was amazing! Nate Robinson is one of the most athletic dudes I have ever seen play the game.

NBA All-Star Game 1997: Glen Rice sets scoring record for a quarter
This one sticks out because I had a friend who was a huge Seattle Supersonics fan and he keep arguing and complaining that Gary Payton should have won the MVP that year. Glen Rice set some records, won the award and that is history!

BONUS: NBA All-Star Game 1996: Jordan pulls off Penny Hardaway's pants
I thought this was hilarious when I saw it happen live. I always held onto my pants whenever I stepped out onto the court from that point on. 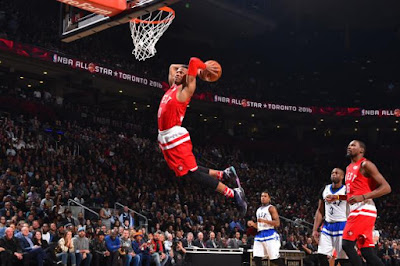 One of these years I will make it to an NBA All-Star Game. It is one of the top things on my bucket list! Who will make a historic highlight this year? I'll be watching! Now go see what these other Retro Ramblers viewing habits are:
Retro Ramblings: WWE Royal Rumble
The Harvey Mercheum: Loves a parade
Posted by Spyda-Man at 4:10 PM