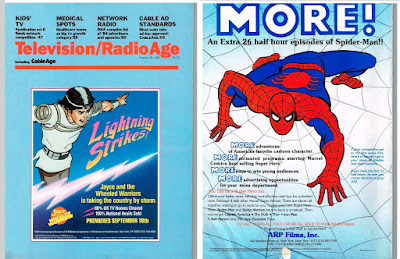 Almost one year ago I was tasked with cleaning out the office of our recently retired art director of 34 years. It took almost a full week to clean up that office. 34 years is a long time to accrue stuff! I found quite a few things that had historical significance to the station I work for and set those aside.  Of course some things were not needed for the station, but had some value to me, like this old issue of the trade magazine "Television/Radio Age" from August 1985. Here are some of the amazing things I found inside it's pages! 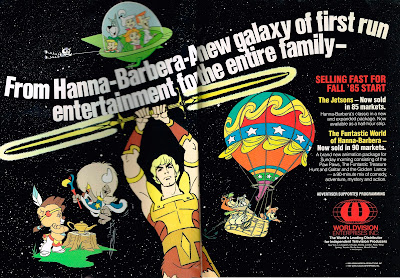 Hanna-Barbera Fall 1985 Ad
This ad features some of Hanna-Barbera's most popular toons at the time like The Jetsons, Yogi Bear, Paw Paws and Galtar! Can't say I remember Galtar and the Golden Lance, but it looks like HB's attempt to replicate the Masters of The Universe. Anyone remember Galtar? 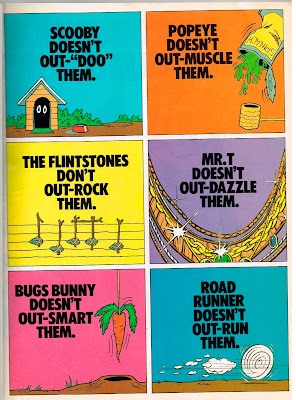 This ad actually caught my eye. It was on one page and you had to turn it to see who they were talking about. Who could be this amazing back in '85 that they could out dazzle Mr. T and outrun the Road Runner? WHO? 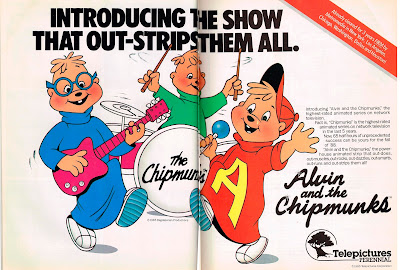 Alvin and the Chipmunks
Of course it was Alvin and the Chipmunks, who else could it have been? I loved getting home from school and being able to unwind and watch the Chipmunks before it was time to do homework. According to this ad The Chipmunks were the #1 highest rated animated series on network television! It was so popular that they were selling it 3 years in advance through the fall of '88! 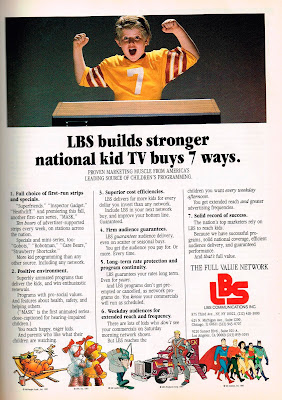 LBS Communications Sales Ad
LBS Communications may not be around anymore, but they did have some pretty sweet properties to sell back in the 80s like Heathcliff, Inspector Gadget, MASK and the DC Superfriends. I just learned from this ad that MASK was the first animated series that was Closed Captioned for hearing impaired children. That's solid Matt Trakker! 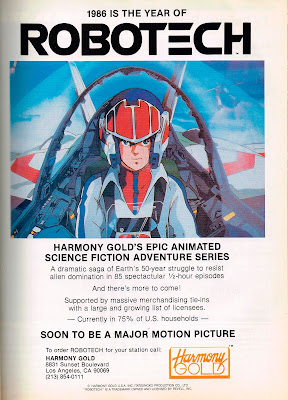 Robotech
Did you know that 1986 was the year of Robotech? Well, because of this ad now you do! I actually never watched the show as a kid, but I loved the action figures and had a few of them in my collection. They would battle with my GI Joes and other smaller figures for the fate of humanity! 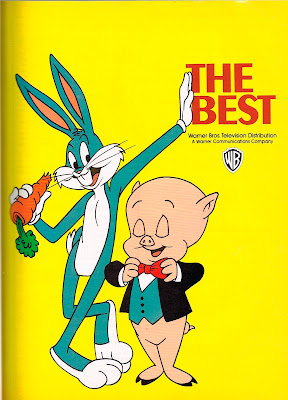 Warner Brothers
Not much to say here. They were simply "The Best". Now that Tina Turner song is stuck in your head. Isn't it? 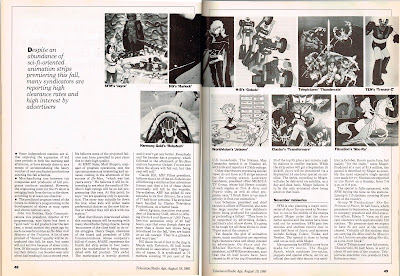 Children's TV Programming Article
I included this article just because it shows that the 80s were the Golden Age of Cartoons! Back in '85 television stations were looking for opportunities to expand their cartoon blocks not only in the morning, but in the afternoon also! Today local channels barely have any children's programming at all. Working for an NBC affiliate, I just recently saw them eliminate cartoons on Saturday morning entirely in favor of tween centered programming and that just makes me sad. Yes, today we have Cartoon Network, Boomerang and Toon Disney that deliver cartoons 24-7, but it just doesn't match up to the great shows we had back in the day. Kids today will never know the thrill of waiting in anticipation to catch a glimpse of the new cartoons that would be hitting the air on the fall cartoon preview show!
Did you enjoy this look through an old magazine? Well if you did check out what else I found in our art directors office in these past posts on 20 Years Before 2000:
Advertising Archaeology: Work Edition #1
Advertising Archaeology: Work Edition #2
Posted by Spyda-Man at 3:04 AM