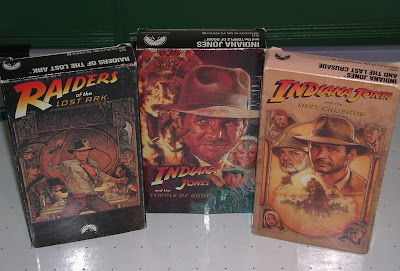 For a while now I have been wanting to watch the classic Indiana Jones trilogy of movies. I do not own them and just never pulled the trigger to purchase the set on DVD/Blu-Ray and Netflix does not have these movies on demand. So, I would just watch something else like Lethal Weapon or Beverly Hills Cop to get my 80s action fix. Then I found these 3 VHS beauties for $0.25 each! I dusted off the tape player and enjoyed these great movies. 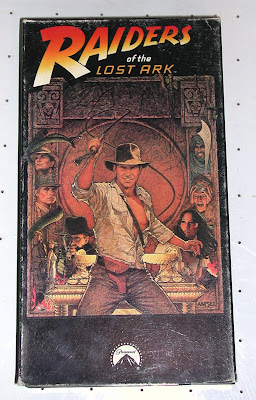 Raiders of the Lost Ark (1981): This was not the first Indy movie I saw and it would be years after it's release before I watched it. This is how adventure movies should be done. Lucas and Speilberg at the top of their game.
The highlights are obviously the opening where Indy avoids the giant boulder and the end where the Nazi gets melted by the ark. Checking IMDB, I just found out that Dr. Octopus himself, Mr. Alfred Molina was in this movie! 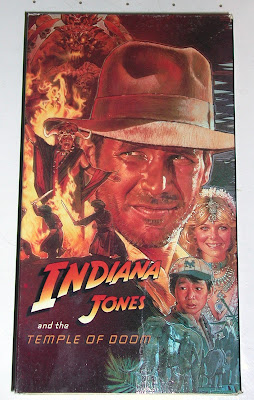 Indiana Jones and the Temple of Doom (1984): This movie was my introduction to Dr. Jones, and what an intro it was.
From the opening where a guy gets a flaming skewer thrown into his chest, to Data from the Goonies, to still beating hearts being ripped out to bad guys being torn apart by alligators there is just so many memorable moments to this movie! I didn't even mention the cart race of good vs. evil in the mines! Amazing movie! 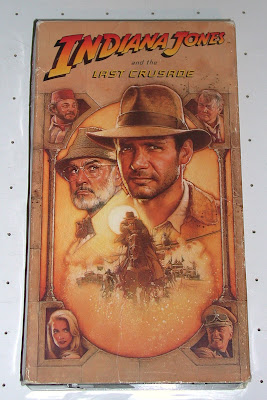 Indiana Jones and the Last Crusade (1989): As the alleged last movie in the Indiana Jones series, this movie did it right.
They introduced Indy's dad, played by the great Sean Connery which was a great addition and the adventure was just as exciting and dangerous as the previous installments. Even Hitler has a cameo! A nice way to send off the franchise. Let's not talk about that other movie. The less said, the better.
Indiana Jones and the Kingdom of the Crystal Skull (2008)
Posted by Spyda-Man at 2:41 AM