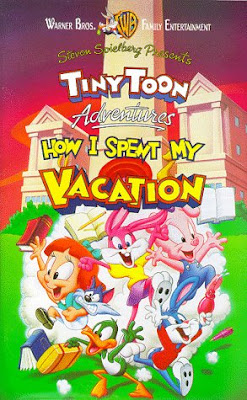 The feature length movie Tiny Toon Adventures: How I spent My Summer Vacation was released exclusively on VHS in 1992 by Warner Bros. The film was later released as a 4-part event during the regular airings of Tiny Toon Adventures on our local FOX station (FOX 5 NY) and became a summer tradition for a few years in my house. We knew summer was here once that special aired after school.

Just last week my kids had their last day of the school year and we celebrated by popping in the "How I Spent My Summer Vacation" DVD. I hadn't seen this movie in years and I really loved watching how much my kids enjoyed it. A lot of the jokes were dated and over there heads but the overall stories of Babs & Buster on the river, Plucky & Hamton heading to Happy World Land and Fifi fawning over Johnny Pew really kept them entertained. If you asked them "What were your favorite parts of the movie?" my kids would more than likely say "EVERYTHING!", in my case here are my top 5 moments from Tiny Toons: How I Spent My Summer Vacation!
1. The opening musical montage
This is the very beginning of the film and it shows the students of Acme Looniversity counting down the seconds on the last day of school and discussing what they planned to do in the summer. This brings me back to those final days of grade school when all we did was watch movies, clean the classroom and goof off with our friends one last time before going off for vacation. The song is catchy too! 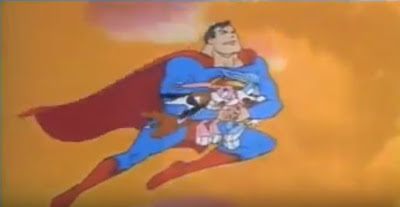 2. Superman Cameo
After falling off a waterfall while floating down a river created by Babs and Buster's reckless water fight the two bunnies are rescued by none other than Superman! He is promptly told by Buster & Babs that he is in the wrong movie and he should get his own video. This leads the man of steel to drop the bunnies back into the raging river.
I like how the depiction of Superman in this brief cameo resembles his appearance in the Max Fleischer animated Superman series from the 40s. Don't believe me, take a look at the video above and judge for yourself! 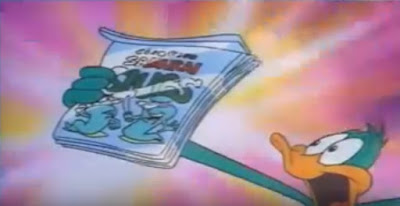 3. Immature Radioactive Samurai Slugs
While Plucky and Hamton's family are on their way to the Happy World Land amusement park, Plucky tries to find a way to pass the time. He pulls out his mint condition, first printing of Immature Radioactive Samurai Slugs #1! These homages to the TMNT made an appearance in another episode of Tiny Toons complete with AWESOME theme song!
I was a huge fan of the Teenage Mutant Ninja Turtles at the time, so I could sympathize with Plucky when Hamton threw up all over his prized comic.

4. Masked Maniac
As Plucky & Hamton went about their long road trip they encountered a ton of craziness including Uncle Stinky's sweat, rest stop bathroom clean-ups and playing the "There's A Car" game, but none was more dangerous than when the family picked up a hitchhiker who turned out to be a pork loving, chainsaw wielding raving masked maniac!

5. HAPPY WORLD LAND
After overcoming all of the obstacles and family friendliness, Plucky finally made it to Happy World Land. I loved seeing the rides the park had to offer as a kid and always wondered what it would be like to ride the Happy Go-Pukey, The Gargle, Slap Happy and the Happy Centrifuge. Unfortunately for Plucky he was left wondering also. The Pig family rode the monorail and then it was time to go home and subdue Plucky to one more form of torture...a SLIDESHOW!!! 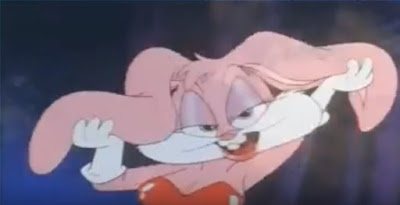 Now we end this post with a picture of Babs dressed up like Jessica Rabbit, just because!
Posted by Spyda-Man at 1:22 PM