I have a fairly big collection of loose figures from the 80s & 90s. I would like to share a few of my faves with you at this time. Get ready, here we go!
TMNT Talkin' Turtles: Leonardo (Playmates Toys, 1991) 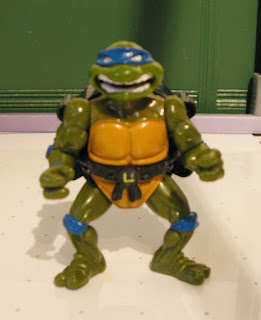 This is the original Leonards Talkin' Turtle I had as a kid growing up with Turtle Fever. If I remember correctly, my older brother was actually the one that bought this guy. I loved the facial sculpts of this TMNT toy series. I mean look at that battle ready facial expression! On the downside I remember these "Talkin'" Turtles really did not talk that well. You had to insert a "Quip Strip" into the shell/sewer cover on their backs and pull it at the right speed so you could almost understand the mumbled voices of the TMNT. Great concept, just a little underwhelming when you expect your heroes to have a convo with you.
McDonalds Happy Meal: Kermit (McDonalds, 1990) 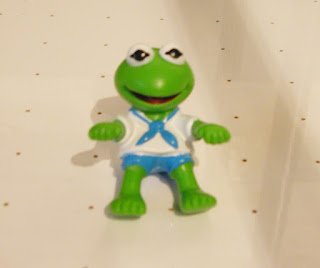 Oh Man! Where do I start with this guy? Everyone loved the Muppet Babies cartoon and everyone had these McDonalds toys. Between myself, my brother and the neighbors, we had the whole first series of these guys! This Kermit is from the second series that came out as the Muppet Babies popularity was sliding. I do not remember collecting this set with the same ferocity as the first, but damn does it bring back great memories. 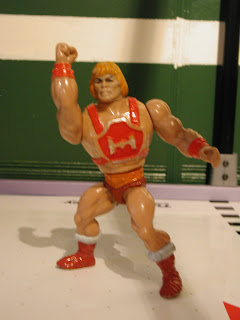 Thunder Punch He-Man was a figure I never owned as a kid, but my neighbor had him and I was jealous! It's He-Man who blasts roll caps out of his back! That smell of a freshly popped cap still reminds me of this figure to this day. I picked this figure up at a yard sale a while ago for about $1. He is a little used and abused, but can still bust caps with the best of 'em! 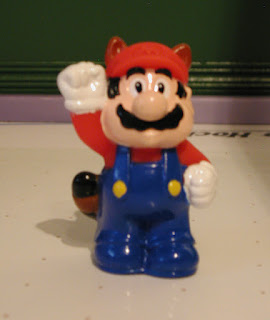 This figure really confused the hell out of me. He was in one of those grab bags at Goodwill. It was Mario in his raccoon suit, I had to get him. I looked on the bottom of his feet and it said "1989 McDonalds". Did McDonalds put out a second series of Super Mario Bros. 3 figures I never knew about? Nope! This is the Under 3 toy that came out with the greatest Happy Meal set of all time, the 1989 SMB3 Happy Meal. I never knew this thing existed, but I am glad I own it.

Transformers were the hotness for many years in the 80s. Since they were so popular you would see tons of copy cat vehicle/robot toys on the shelves. One of the greatest copy cat toys were the McDonalds Food Changeables aka McRobots! This little guy's name is C2 and he is from the second series that came out in 1989. This series also included a Big Mac, Large Fries, Hotcakes and an Ice Cream Cone! I love the fact that not only did we get toy sized McDonalds foods in this Happy Meal, but they turn into badass robots fighting for our right to eat fast food on planet Earth!
Posted by Spyda-Man at 3:57 AM

Email ThisBlogThis!Share to TwitterShare to FacebookShare to Pinterest
Labels: Mario, Masters of the Universe, McDonalds, My Faves, Ninja Turtles