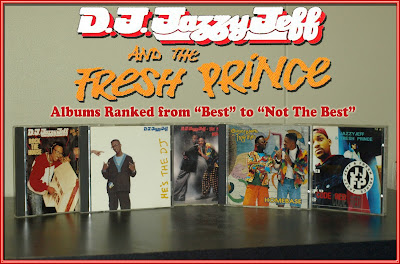 I am huge fan of DJ Jazzy Jeff and the Fresh Prince. I've been listening to their music since "Rock The House" came out in 1986. So asking me to pick my favorite album out of the bunch is like asking me to pick my favorite kidney! I can't rank from Best to Worst, because there are no bad albums. In my opinion, just some that are better than the rest! Let's give it a shot!

#1: Code Red (1993)
Fave Cut: "Ain't No Place Like Home"
I know most people would make "Homebase" their #1 pick because it has "Summertime" on it, but if I had to listen to one of JJ & FP's albums over and over, it would be Code Red. This album is a little more grown up, the rhymes and beats are tighter and the selection of songs is great! Some of the top tracks are "Somethin' Like Dis" & "Just Kickin It", but my favorite is "Ain't No Place Like Home". It reminds me of my family. Being so far away from them, I can appreciate the thought that went into creating this song.

#2: Homebase (1991)
Fave Cut: Summertime
This album is not only a JJ & FP classic, but it is a milestone in Hip-Hop and won the group their second Grammy. Obviously "Summertime" is one of the all-time great rap songs, but cuts like "I'm All That" and "Trapped On The Dance Floor" get overlooked because Summertime is so damn good! My only complaint on Homebase is the inclusion of the song "You Saw My Blinker". I understand this is another funny story rap, but the inclusion of the word "Bitch" so many times causes me to skip the song while listening with the kids. It's such a steep departure from what we expect from these guys. Still, with this minor complaint, I highly recommend you pick this album up!

#3: He's The DJ, I'm The Rapper (1998)
Fave Cut: Brand New Funk
This is the album that put JJ & FP on the map! It includes the hit jams "Parents Just Don't Understand" and "Nightmare On My Street". The "Parents" video hit huge rotation on MTV in 1988 and brought the dynamic duo into so many houses. Without this album we may not have had any more JJ & FP albums, The Fresh Prince of Bel-Air or Will Smith in Independence Day! This album was a multi platinum smash, won a Grammy Award and also was the first ever rap double-record release. Historic, fun and old school hip-hop at it's finest!

#4: Rock The House
Fave Cut: Just Rockin'
The CD that I own is the re-mastered version of "Rock The House". The original had a few lyrics in it that may have been seen as a little to naughty for the intended audience. An example is from the song "Just One Of Those Days". The original lyric was "I couldn't resist so I grabbed her butt!" The word "Butt" was covered over by a scratch sound and sounds like it was changed to say "Belt" in the re-release? They also added an exchange between JJ & FP at the end of "Girls Ain't Nothin' But Trouble" to include references to "Parents Just Don't Understand" and "Nightmare On My Street". Not huge problems, but I wish they would release the original version in all it's glory on CD or iTunes. I still have the original on Cassette tape somewhere at my Mom's house.

#5: And In This Corner
Fave Cut: Numero Uno
Once again, I have to say that this is not a terrible album, it's just my least favorite out of the 5. It contains the hit "I Think I Can Beat Mike Tyson" and other solid songs. It just feels to me that this one was rushed a little bit and does not contain the same creativity as past releases. Fun Fact: Did you know James Avery and Alfonso Ribeiro have cameos in the "Tyson" video?