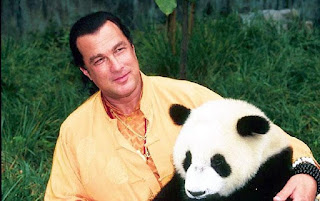 As a kid, did you ever want to be a karate master? Did you ever want to rescue a damsel in distress with a sweet round house kick to a muggers face? Did you ever want to perform covert ops for a shady ninja clan? If the answer is yes, than I have the next best thing! STEVEN SEAGAL'S LIGHTNING BOLT ENERGY DRINK! You have to type the name in all caps, otherwise Mr. Seagal sees it as a sign of disrespect and will punch you in the nuts. 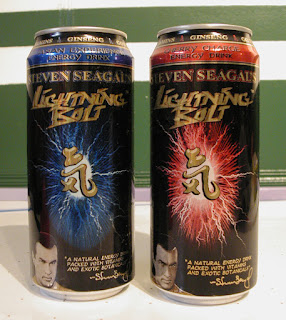 Yes, I do still have 2 cans of this drink in my collection! Almost a decade ago when I worked at Wal-Mart, we would stock this stuff in our cold beverage display. During lunch breaks myself and a friend would grab a LIGHTNING BOLT and Chimichanga to refuel for the next 4 grueling hours of stocking shelves and customer service. They only cost $1, so it was pretty cheap and worth a try. 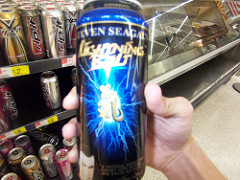 The taste was a bit odd. According to my resources aka Google, LIGHTNING BOLT came in 3 flavors: Asian Experience, Cherry Charge and Root Beer Rush. I have never seen the Root Beer Rush flavor on shelves, but can only guess it tasted AMAZING! In my opinion, Cherry Charge tasted like a liquid form of Cherry Halls Cough Drops with Mentho-Lyptus. I have never been to Asia, and now I don't have to. For the low price of $1, I already had my Asian Experience and it tasted like honey mixed with mint flavoring. Not at all what I was expecting! 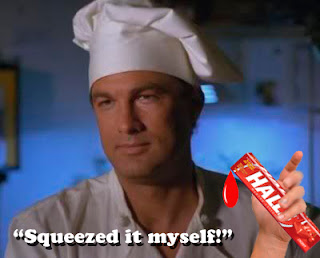 These drinks are no longer being produced, most likely do to low sales. The only real reason to try LIGHTNING BOLT would be for the novelty of it and to tell your children that one day you took on Steven Seagal...in energy drink form. In closing, we need more of this 90s icon. We need more Steven Seagal. Give him a call Hollywood, I'm sure he's available? He may be a little crazy, but who isn't? I'm sure he's available.