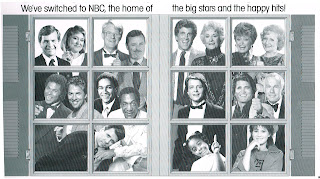 I work for an affiliate television station and just recently our art director of 34 years retired. It was tasked upon me to clean out his office to make room for a new employee. I was told to keep anything that might have some historical significance to the station. It almost took a week to clean up that office. 34 years is a long time to accrue stuff! Of course some things were not needed for the station, but had some value to me. Here is part 1 of what I dug up: 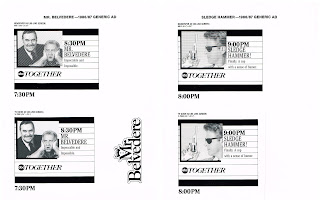 Newspaper ad layouts for Mr. Belvedere & Sledgehammer from the 1986/87 season
Mr. Belvedere was one of my favorite shows growing up. It seemed so adult at the time and having a kid around my age in the show gave me someone to relate to. Once I found out that Bob Uecker used to play Major League Baseball, my mind was blown! And that theme song...where do I begin! It has to be one of the greatest and catchiest of all time. The piano notes in the beginning alone give me goose bumps. Whatever happened to good ole Mr. Lynn Aloysius Belvedere? I imagine he is with some exotic diplomat, serving blue drinks with umbrellas on a beach with beautiful women right now. 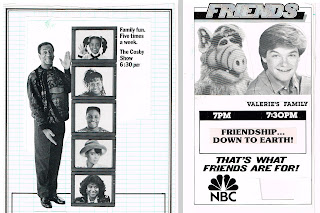 The Cosby Show and Alf/Valerie's Family Ads
We all know what's going on with Mr. Jell-O Jiggler right now, but before all that he was the dad everyone secretly wanted. Delivering babies, reppin Temple University and making hoagies Philly style! This was, is and always will be one of the best shows on television. Not that I knew it at the time but between the laughter and lessons, The Cosby Show broke stereotypes and showed educated, high standing African Americans every week, killing all previous stereotypes and teaching a generation that no matter what race you are, you can achieve your goals and succeed. Did I go to far with this "The More You Know" moment?

The Disney Sunday Movie & Monday Night Football  Logos
The Disney Sunday Movie was an opportunity for families to sit together and enjoy a program before a new week full of school, work and sports practices began. This series of films that ran from 1986 to 1988. I wish they would bring this back to ABC. I would watch it with my kids. Some of the standout films I remember recording on VHS and watching over and over and over where: Mr. Boogedy, Robin Hood and Fuzzbucket. Also, who could forget the intros to each movie with Michael Eisner and Mickey Mouse as the hosts? 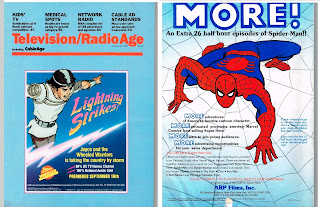 Television/Radio Age Magazine (August 19th, 1985)
How could I not save this from the trash? I really liked the Jayce and the Wheeled Warriors toy line as a kid, but never really got into the show. Why can't they make theme songs like this anymore? Me and my brother would switch parts to our machines all the time and then argue about whose piece belong to who. Now that I think about it, it was kinda a pain in the ass! The Spider-Man ad on the back was also fun to see. What kid didn't love Spider-Man? This was around the time where Secret Wars was blowing up big time and everyone had at least one action figure to play with in the back yard. I'll get deeper into this magazine in a latter post to show you what's inside. 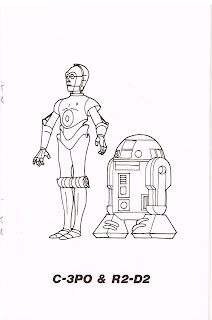 C-3PO & R2-D2 Coloring page
Found an old coloring book that must have been used as a giveaway at appearances for the station. Other pages included the Ewoks, Super Friends, Scooby-Doo and the Looney Tunes! Fun fact: The opening theme, "Trouble Again" was performed by Stewart Copeland of The Police!
I hope you enjoyed this look back on TV advertising from the 80s. Part 2 is coming soon.
Posted by Spyda-Man at 8:13 AM