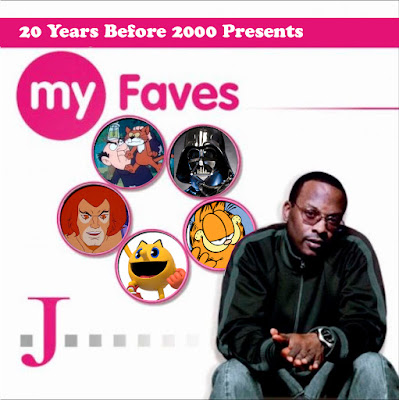 I have a fairly big collection of loose figures from the 80s & 90s. I would like to share a few of my faves with you at this time. Here we go! 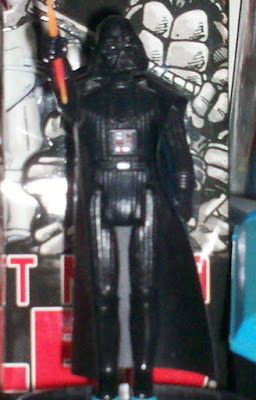 Darth Vader (Kenner, 1978)
Darth Vader was one of my favorite characters and figures growing up. He used to have epic battles with Luke Skywalker in my back yard. In those battles, he managed to loose his cape and light saber. I still have my childhood figure somewhere. The figure that is shown, is one that I purchased while working for a small mom & pop toy store in high school. We would purchase collections from people and once a huge Star Wars lot came through the door. It had Yak Face and Ghost Anakin, but the figure that caught my eye was Darth Vader with cape & light saber. I grabbed this guy up and now he is featured prominently on my shelf of greatness! 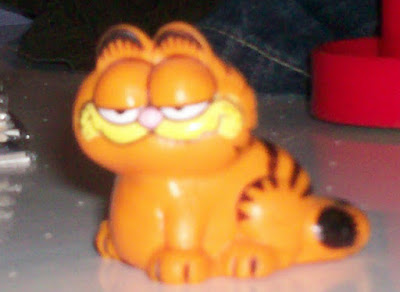 Garfield (Applause, 1983)
I think every kid in the 80s had one of these figures or one similar to it. Everyone around this time enjoyed Garfield and his friends. I don't know who bought this figure or when we got it, but I loved it! I used to have another version of this figure where Garfield was wearing a winter hat. Don't know where that one went? My guess, mom's attic? 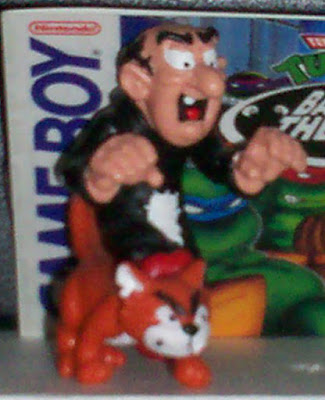 Gargamel & Azrael (Schleich, 2011)
This is a recent release from Schleich in the classic Smurfs style. I believe it came out around the time of the first Smurfs movie? As a kid, I had a ton of Smurfs. Only a few have survived to be in my collection today. One I never had was Gargamel. So to find a figure of him with Azrael on clearance at Barnes & Noble was a surprise. I did have a Gargamel toy as a kid. But not to this scale. It was a wind up toy, where Gargamel would try to catch a moving Smurf in a box. Anyone remember that one? I may have to track one of those down someday? 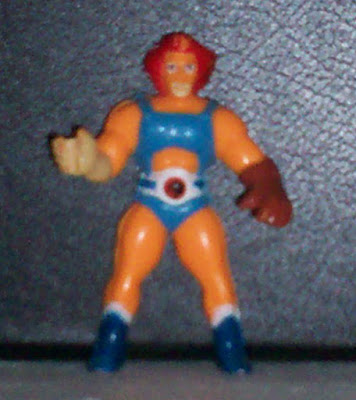 Thundercats Miniature Lion-O (Kidworks, 1986)
We had a whole army of these little guys in the mid 80s. Me and my brother had Mumm-ra, Ssslithe, Monkian, Vultureman, Tigra and even a mini motorized Thundertank! These toys were perfect to take in the car. Much smaller than the large LJN toys, but pieces were lost easily. Notice how Lion-o is missing his Sword of Omens. These figurines had no articulation, but that didn't stop us from having epic battles for the fate of 3rd Earth! 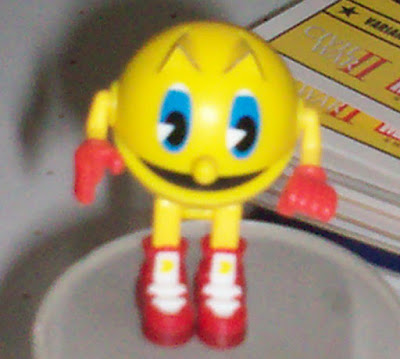 Pac-Man (K'nex, 2013)
This figure was from the "Pac-Man and the Ghostly Adventures" K'nex blind bag assortment. A tie in to the cartoon show. We actually own 2 of these because the first one had a leg break off! The kids do play a little rough, but we love Pac-Man enough to go out and buy a new figure. It also helps that these were on clearance for under $1 about a year ago at Toys R Us.
On a final note, enjoy this commercial from 1984 for delicious Pac-Man Pasta from Chef Boyardee! I still remember how the chicken pasta looked and tasted.
Posted by Spyda-Man at 7:48 AM