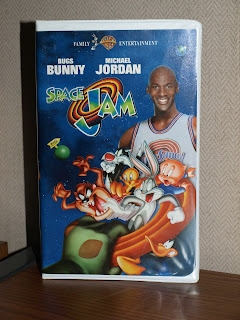 While we wait for LeBron to lose another NBA Championship and begin filming Space Jam 2, I just re-watched the original Space Jam with my kids. They loved it...and so do I! Michael Jordan was at his peak of popularity, Bugs Bunny and crew were looking for a way to regain their star status and then came a campaign of Nike ads to help them out. Space Jam was born!
Space Jam was released in November of 1996. The Chicago Bulls were world champs again, Cal Ripken broke Lou Gehrig's consecutive game record, Oprah started her book club, Bone Thugs blew up with "Tha Crossroads", Seinfeld was still popular on TV and Tupac, Jerry Siegel & the great Tiny Tim had passed away. The world needed a savior. The world needed Bugs Bunny, Daffy Duck, Michael Jordan and Wayne Knight. 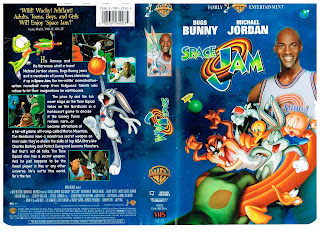 I remember seeing this movie in theaters. My friends (Knicks fans) were skeptical that it would be any good. In the end all of us enjoyed it. A few years ago, while shopping a yard sale, I found a copy of Space Jam on VHS for $0.50. I would have paid that for the movie itself, but on the back, tucked into the sleeve was...

The limited edition Space Jam collector's coin! Holy crap! I grabbed this up immediately and took it home. I never did watch this VHS tape since I already owned the movie on DVD. So, to my surprise as I was cleaning the basement yesterday, I opened the VHS clamshell and found...ALL THE ORIGINAL COUPONS! These were included in every VHS/DVD release and were thrown away pretty quickly. Here they are in all their 90s glory:

I wish I could go back to 1997 and take advantage of the offers from Dole, Ballpark, Rayovac & Warner Bros. I would have entered the "Meet Mike" contest, scored a Special edition Space Jam Streetball & Mini-Pocket basketball game and saved about $1,000,000 in rebates! Unfortunately that will never happen, but it's still fun to see these 20 year old ads. I suggest you dust off your copy of Space Jam and watch it today!
Posted by Spyda-Man at 10:07 AM