Every summer our town has a huge flea market which I try to make it to. You'll find everything from used tools to artwork to vintage toys. This past year I was able to score a few carded WildC.A.T.S figures a box of Deathwatch 2000 cards and some Nintendo DS games. But the best pickup of the day had to be this vintage Coleco Donkey Kong table top arcade game from 1982! 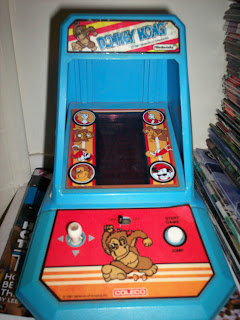 The seller wanted a pretty high price for this item. He claimed it was something he didn't want to get rid of, but his wife was making him do it. I passed and figured I'd go back later and if it was still there, it was meant to be mine. I went back after searching about 100 tables and Donkey Kong was still on the table. I made an offer to the seller. He refused. In the end I paid him the asking price, but he did throw in a few Hot Wheels cars to sweeten the deal! 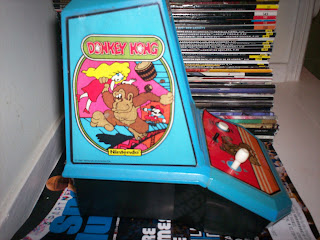 It worked and immediately reminded me of the scene from Gremlins where Stripe and his Mogwai buddies were playing the same game under the Christmas tree while Gizmo tooted his horn in the spirit of the season.

This past year a Reaction figure of Stripe was produced and included a mini version of the game. Of course I had to own that too. I added it to my collection this past holiday season. 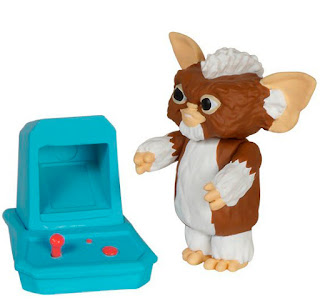 I attempted to snap a pic of the screen, but it came out all blurry. Thankfully I was able to grab this off the website Geek Vintage. My kids and I enjoy playing this game from time to time. Sometimes it is frustrating and other times satisfying. There is nothing like the feeling you get when you reach the top and save your girl...only to have her get nabbed again by DK! 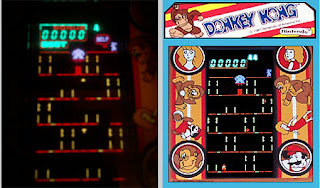 The artwork on this game is fantastic and definitely from the 80s. With a classic depiction of Mario and the pre-Donkey Kong Country DK without a tie. I always wanted one of these as a kid and the dream was realized in my 30s. Better late than never! Now enjoy some retro ads for the Coleco lineup of mini arcade games! 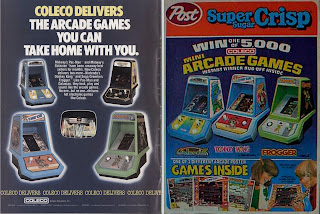